With the new update, Swift has received a tweaked front end, new features and a more powerful engine.Maruti Swift facelift competes against rivals such as Tata Tiago, Hyundai Grandi10 Nios, and Ford Figo.
By : HT Auto Desk
| Written By : Prashant Singh
| Updated on: 27 Feb 2021, 10:30 AM 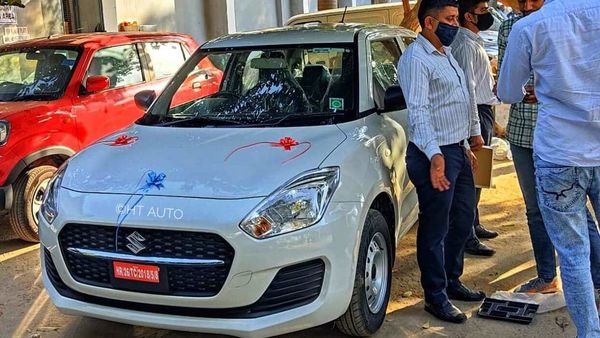 Maruti Suzuki has started deliveries of the new Swift facelift in India. The car was launched earlier this week starting from ₹ ₹5.73 lakh and extending up to ₹8.41 lakh (both prices are ex-showroom, Delhi).

It has been given a tweaked front end. There is a new cross mesh front grille with a chunky chrome stripe dividing the radiator grille. Thanks to the new addition, the car appears to be slightly sportier in comparison to the pre-facelift model. Save for this detail, the rest of the design remains the same. The car has been introduced in a total of five variants - LXi, VXi, ZXi, ZXi+ and ZXi+ dual-tone variants.

The car draws power from a more powerful 1.2-litre dual-jet naturally-aspirated K12N engine. This unit also powers the Dzire compact sedan. It delivers a maximum power of 90 PS and 113 Nm of peak torque. The transmission option includes a 5-speed manual gearbox and a 5-speed AMT unit. The car is claimed to offer a fuel efficiency of 23.20 kmpl for the petrol-MT variant and 23.76 kmpl for the AMT option.