Maruti Suzuki makes the 3-door version of the Jimny SUV in its Manesar, Haryana plant, the same is exported to the world markets.Upcoming 2022 Maruti Jimny will rival the Mahindra Thar and the Force Gurkha.
By : HT Auto Desk
| Updated on: 16 Oct 2021, 12:36 PM 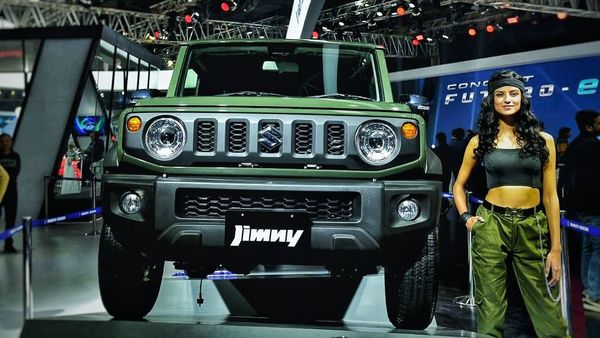 Maruti Suzuki has rolled out a teaser through Nexa's social media handles of an upcoming car which is most likely the much-awaited Jimny SUV. The teaser uses the tagline, "This just in! A wild adventurous ride has been spotted making its way through different terrains! The one question is, what car is this?"

The teaser shows car tyres marks on an off-road/desert trail which leads us to believe that the car may be nothing else but the upcoming Jimny SUV. While the company makes the 3-door version of the SUV in its Manesar, Haryana plant, the same is exported to the world markets. On the other hand, India is slated to get the longer 5-door version of the Jimny, which is currently been developed.

In India, Mahindra has already launched its new-gen Thar SUV, and also new-gen Gurkha has been recently launched. Maruti's upcoming Jimny SUV will be a direct rival to both the hardcore off-roaders. The new India-spec 5-door LWB version of the Maruti Suzuki Jimny is expected to go on sale in the country in 2022.

The international-spec Jimny comes with a 1.4-litre mild-hybrid turbocharged petrol engine, however, for India, a 1.5-litre K15B petrol can be used. The same engine is also found in the currently present Vitara Brezza, Ciaz, Ertiga and the XL6 cars from Maruti. This engine is rated to produce 103 bhp of maximum power at 6000 rpm, along with 138 Nm of peak torque at 4400 rpm. The engine will come mated to a 5-speed manual gearbox and an optional 4-speed automatic torque converter transmission could also be offered.