Earlier, Maruti Suzuki had revealed the front face design of the Grand Vitara SUV. Maruti will officially take unveil the Grand Vitara on July 20 while the launch and price announcement will happen later this year.
By : HT Auto Desk
| Updated on: 14 Jul 2022, 10:45 AM 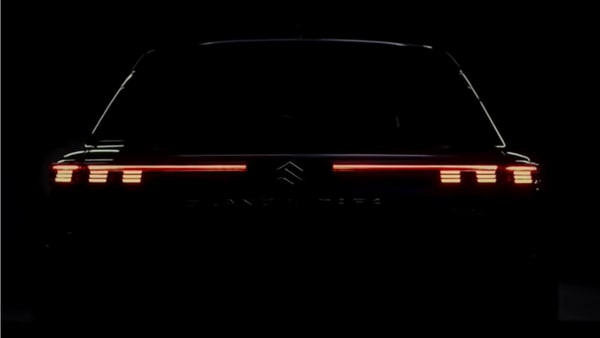 Maruti Suzuki continues to tease the upcoming Grand Vitara SUV with looks and features being revealed gradually ahead of the much anticipated official unveiling on July 20. In its latest teaser, Maruti Suzuki offers a sneak peek at the new taillight design of the Grand Vitara SUV. The LED taillights offer a unique design unseen in any Maruti car launched so far. When launched, Maruti Suzuki Grand Vitara is aimed to take on rivals such as Hyundai Creta and Kia Seltos among other key players in the compact SUV segment in India.

The new teaser video released by Maruti Suzuki shows the LED taillights cluster with three units on either side. There is also a LED strip on the boot spreading across the entire length of the Grand Vitara, only to be separated at the centre by the Suzuki logo. This is the first time Maruti Suzuki has offered a full glimpse at the taillights of the upcoming SUV.

Earlier, Maruti Suzuki had revealed the face of the Grand Vitara SUV partially. Elements like the LED DRL and LED headlights, which also get three units on either side like the taillights at the rear, the grille and a silhouette of the SUV's profile showcasing large glass area and the C pillar design were revealed in the earlier teasers. The SUV appears to be sitting on a large set of wheels, probably sized between 16 and 17 inches.

So far, there are no details about the interior of the Grand Vitara SUV yet.

Maruti Suzuki has already opened bookings for the Grand Vitara at an amount of ₹11,000. The Grand Vitara name has been borrowed by Maruti Suzuki from its erstwhile compact SUV in India from the early 2000s, which was later discontinued. The new model will be offered in two variants. Besides a standard model, which is expected to be offered with the new K15C series petrol engine, the Grand Vitara will also come with an Intelligent Electric Hybrid variant.

Maruti Grand Vitara SUV is largely based on Toyota Urban Cruiser Hyryder SUV, which was recently unveiled by the Japanese carmaker in India. It is expected that the Grand Vitara will share the same powertrain. The Hyryder SUV is offered with Toyota Hybrid system mated to a 1.5-litre petrol engine capable of generating maximum output of 68 kW and peak torque of 122 Nm.

Maruti Grand Vitara SUV will break cover on July 20. However, the official launch and price announcement of the Grand Vitara is still some time away.