While both the Thar and the Gurkha stand in the same segment, they are quite apart in approach and appeal to a slightly different target audience.
By : Prashant Singh
| Updated on: 24 Mar 2020, 08:28 AM 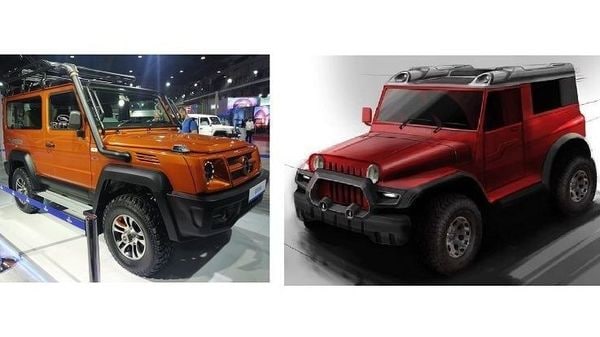 Mahindra Thar 2020 has created quite a lot of buzz in recent times and has also been spotted on-tests several times in the past. The spy images available till date hint that with the new generation, the Thar will carry several evolutionary style updates.

It has always been an arch rival to the Force Gurkha SUV which has already received a yearly update and was displayed at the Auto Expo 2020. From the exterior, the new version of the Gurkha looks quite similar in comparison to the outgoing model, but on the inside, it has been reworked.

The new-gen Thar (codename: Mahindra W501) will look broader than the previous model. Overall, it will carry some of its iconic design characteristics such as the rounded headlamps, flat bonnet, brick-shaped rear lights (LEDs) and more. It will now also come with LED daytime running lights on the front fenders which make it look more modern and appealing.

The 2020 Gurkha, on the other hand, remains similar and carries an all-new grille, flanked by refreshed projector headlamps. It also features new cube like LED daytime running lights (DRLs) which make it tad more likable. Moreover, the front bumper looks bold and comes with added bulk to make it look muscular. The overall profile looks unchanged and so does the silhouette.

Coming on to the inside, while the latest Gurkha is finally getting some new creature comforts like power windows and a touchscreen infotainment system, Thar, on the other hand, has stepped onto a whole new level altogether. Speaking of which, the Thar 2020's cabin comes fully revamped. It gets a new dash layout, re-positioned passenger grab handle, new seat upholstery, updated metre console and infotainment system. Also, the company has reserved equally significant updates to its rear-seats as well. The previously found, conventional seating set-up has been replaced with front facing seats in order to make the second row safer and more comfortable. Overall, with the new update, the Thar will turn into a comfortable and safer SUV which will be a better daily driver.

Coming to the mechanicals, the new Force Gurkha uses an all-new ladder-frame chassis as well as coil springs all around. Under the hood, it gets a BS 6-compliant 2.6-litre diesel engine which is known to generate 90 PS of maximum power and is accompanied by a 4WD with lockable differentials system. The company has also announced that it may come up with 2WD variant of the Gurkha in future, along with numerous body configurations, and wheelbase options.

The all-new Thar will employ a 2.0-litre turbocharged four-cylinder diesel engine which will churn out 140 PS of maximum power. While several reports suggest that there will also be a 163 PS 1.5-litre turbocharged four-cylinder petrol unit, it will only be limited to the export models. Its transmission options will include a 6-speed manual transmission as well as a 6-speed AMT. A part-time 4WD will also be part of the list.

Both the models will arrive around mid-2020.

The Gurkha BS 6 will be priced higher than the current ₹9.75 lakh* to ₹13.3 lakh* bracket. Expect the prices to jump up marginally in the ₹10.20 lakh* to 14.00 lakh* bracket. The all-new Thar may be priced very competitively and may start from similar ₹10 lakh* point.