The Cupra Formentor became the official car for the Spanish football club FC Barcelona.Barcelona’s German goalkeeper Tee Stegen, who is also the brand’s ambassador, was the first to book one.
By : Sabyasachi Dasgupta
| Updated on: 09 Jul 2020, 10:08 AM 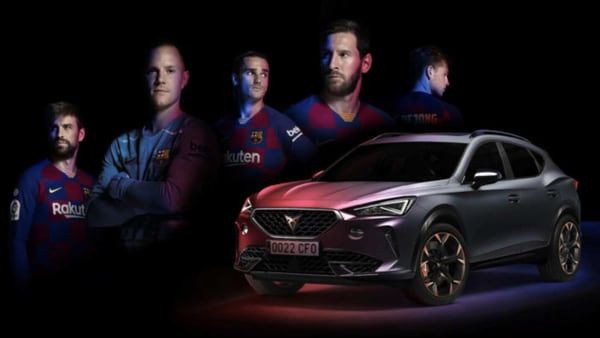 SEAT's sports car brand Cupra has signed a sponsorship agreement for the next five seasons, where the FC Barcelona club will become the new official automotive and mobility partner.

Cupra Formentor model will accompany many footballers such as Lionel Messi, Ter Stegen and Gerard Pique as brand ambassadors. This is the first instance that a football club has received an official car.

The agreement is based on brand visibility, which will take place in all facilities of Camp Nou Stadium. A special area on behalf of Cupra will be established outside the stadium to enable Barcelona fans to learn about the brand.

Also, according to the statement of Cupra CEO Wayne Griffiths, the Cupra Formentor model will be produced predominantly on blue colour with extra parts, specially for players like Messi.

The agreement between Cupra and FC Barcelona includes collaboration not only inside the stadium but also outside the stadium. The two organisations will collaborate over the next five seasons to boost the image of the city of Barcelona, foster talent and innovation, and create unique experiences for global fans.

With this strategic alliance, which goes beyond a traditional sponsorship agreement, cooperation will be carried out on a wide range of activities. Both sides will work on innovative projects to improve urban mobility and fan mobility. They will also work together to develop new solutions for micro-mobility and electro-mobility.

“We are starting a new journey together based on common values such as high standards, passion, ambition and teamwork," said FC Barcelona president Josep Maria Bartomeu. “This innovative alliance will allow us to offer unique experiences to our fans around the world. In this way, we will have the opportunity to cooperate in the development of new solutions that contribute to the development of urban mobility," he said.

Luca de Meo, Seat President and CUPRA Chairman, said “This innovative alliance with one of the biggest football clubs in the world shows our strong commitment to the CUPRA brand and the future of mobility in Barcelona. Also, partnering with a global institution like FC Barcelona with more than 340 million fans will support our globalisation strategy."