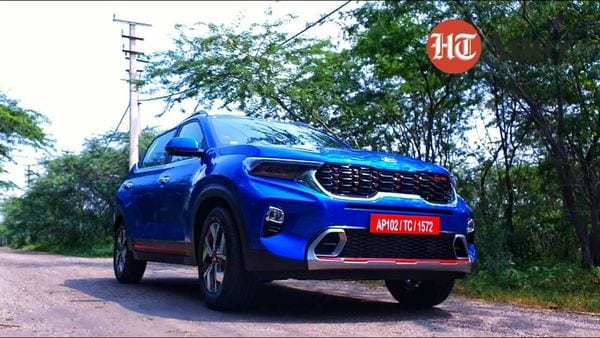 From the latest iMT technology to more than 30 segment-first features - Kia’s latest offering in India, the Sonet SUV, promises to shake up the sub-compact SUV segment.

Kia Sonet SUV promises to shake up the sub-compact SUV segment as the Korean carmaker launched it today at a starting price of ₹6.71 lakh. Kia said that Sonet was pre-booked by more than 6,500 customers on the first day itself. And so far, the bookings have crossed the 25,000 mark.

During the launch event of Kia Sonet, the Korean carmaker said that its latest offering in India is clocking around 1,000 bookings on an average every day. Kia has set an ambitious target of selling one lakh Kia Sonet SUVs in India and exporting 50,000 units in the first year itself.

The introductory price of ₹6.71 lakh is for Sonet's base HTE variant. Price extends up to ₹11.99 lakh for the top of the line GTX+ variant.

Sonet is the third product to join the Kia Motors India's portfolio after the popular Seltos and Carnival luxury MPV. It has been positioned in the hotly contested sub-4 metre SUV space alongside Tata Nexon, Hyundai Venue as well as Mahindra XUV300.

The Sonet will be made available in two trim concepts - Tech Line trim and GT Line trim - as previously seen with the Seltos. While the Tech Line has been reserved for the lower and mid-spec variants, the GT Line will be added on to the higher-spec variants. Moreover there will be as many as seven colour options along with three dual-tone colour themes.

Kia Sonet SUV comes packed with features. The company claims it has more than 30 segment-first features. Besides, it is only the second carmaker to introduce the iMT technology in its cars after Hyundai introduced it in Venue subcompact SUV.