Kia Sonet SUV comes with 33 segment-first features that will set it apart from its rivals in the crowded sub-compact SUV segment.
By : HT Auto Desk
| Updated on: 18 Sep 2020, 08:35 PM 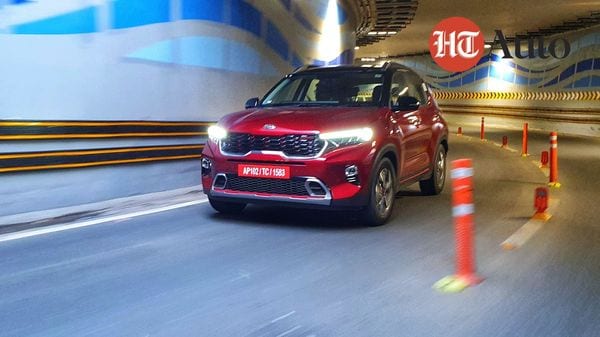 Kia Sonet SUV has been launched in India at a starting price of ₹6.71 lakh. It has clocked more than 25,000 bookings even before the carmaker announced its official prices today during an event. Here is a quick look at why it has been the talk of the town.

Kia claims Sonet SUV will come with as many as 33 segment-first features. Sonet is undoubtedly a feature-packed car that is expected to give its rivals a run for their money, if priced competitively.

With a 10.25-inch touchscreen infotainment system, Kia Sonet boasts of the biggest screen in its segment. It has in-built navigation system, Apple CarPlay, Android Auto, AI Voice Recognition, UVO connectivity and many more features. Most other cars in this segment have infotainment screens ranging between 7 and 8 inches. The second biggest screen after Sonet can be found inside the Ford EcoSport, which is 9-inches wide.

At a time of coronavirus pandemic, Kia has integrated a smart air purifier system inside Sonet SUVs. Kia also claims it can kill harmful virus inside the car. It has a digital display and is placed under the driver’s armrest.

It is the same sound system that is found inside the Kia Seltos SUV. The 7.1 Channel Bose surround sound system with five speakers is one of the key highlights of the new Sonet SUV.

Along with the 7-speaker Bose sound system, the Kia Sonet also comes with LED sound mood lighting. The light strips are placed under the door handles, and keeps changing with the music played inside the car.

Wireless smartphone charging options inside cars these days have become more of a necessity than simply an additional feature. However, Kia decided to take a step further to ensure your phone is not heated even during summer days. The wireless charging compartment has a cooling function to keep your phone away from heat and consume less battery.

Connected car features are increasingly becoming popular given the convenience they offer. Sonet will be the first to offer similar features through its UVO Connect app that not only helps you to remotely start your car and turn on the AC to cool it before a journey, but there are several other applications that will make driving the SUV a more enjoyable experience.

Multiple drive modes have been introduced in sub-compact SUVs in India some time ago. However, Kia will offer a bit more in terms of driving experience by introducing traction modes in sub-compact SUVs. The three modes - snow, mud and sand - will not make a major difference in performance when the Sonet is pushed into such scenarios where you need such modes to kick in, but may well edge out of a sticky situation.

Kia has decided to bring in the 1.5-litre CRDi diesel engine that powers the Seltos SUV in Sonet as well. This specific engine, mated to a 6-speed torque converter, is one of the biggest differences between Sonet and Venue. It can produce 115 PS of power and 250 Nm of torque. No other car in the segment offers a combination of diesel engine mated to an automatic transmission.

Most number of transmission options

Kia will offer Sonet SUV with five transmission options, the most in other SUV in the segment. This has been possible, thanks to the introduction of the latest iMT technology in Kia cars. Besides the 6-speed iMT transmission, Kia Sonet will have a 1.2-litre petrol engine with a 5-speed manual, 1.0-litre turbo-petrol and 1.5-litre diesel engines will have a 6-speed manual, a 7-speed dual-clutch automatic and the 6-speed torque convertor automatic transmission for the diesel engine.