Kia Sonet finds one lakh takers in a year since launch

Kia Sonet was launched back in September last year and is available at a starting price of ₹6.79 lakh (ex-showroom). It rivals Maruti Suzuki Vitara Brezza, Hyundai Venue, Mahindra XUV300 and Tata Nexon among others in the subcompact SUV segment.
By : HT Auto Desk
| Written By : Sabyasachi Dasgupta
| Updated on: 14 Sep 2021, 11:52 AM 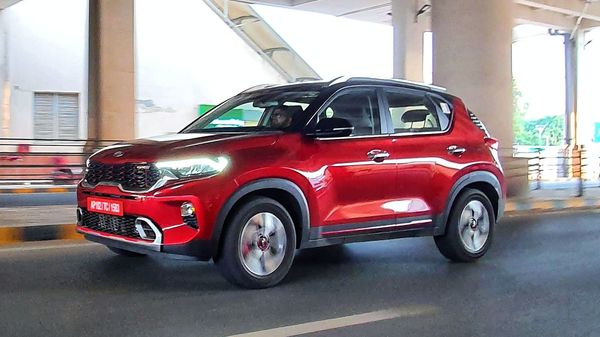 Kia Sonet has crossed the 1 lakh sales milestone in less than a year since its launch. (Photo credit: Sabyasachi Dasgupta/HT Auto)

Kia Sonet subcompact SUV has hit a major sales milestone within a year of its launch. The Korean carmaker has announced that it has sold one lakh units of the Sonet SUV so far since its launch last year.

Kia has said that the Sonet SUV makes up nearly 32% of its overall sales in the country. Sonet is the latest offering from the carmaker after it launched the Seltos SUV and Carnival MPV in India.

Tae-Jin Park, Executive Director and Chief Sales & Business Strategy Officer at Kia India, said, "The Sonet was launched when the auto industry was facing its worst slump in history with the advent of Covid-19 pandemic. The market was battling rock-bottom customer sentiment amidst manufacturing and supply chain setbacks. We introduced the Sonet in September last year against all odds, and it would not be an understatement to say that it has rewritten Kia’s success story in India and has made a stronghold in the segment with its industry-leading features and specifications. The one fourth contribution of iMT variant in total sales testifies that the model has also revolutionised the adaption of new technologies. The PV segment has been witnessing multiple transformations over the years, and as a leading automaker, we are committed to the changing trends and offering new-age driving experience to our customers across segments."

Kia launched a facelift version of the Sonet SUV earlier this year in May. Sonet received key updates like the paddle shifters, besides 10 new features like the first-in-segment Rear Door Sunshade Curtains and Voice command to operate the sunroof. It also gets features like Electronic Stability Control (ESC), Vehicle Stability Management (VSM), Brake Assist (BA), Hill Assist Control (HAC) in the lower variants.

Sonet is available in as many as 17 variants. It is powered by a 1.5 litre diesel engine with automatic transmission, which contributes almost 10% of its overall sales. The top-spec variants contribute the most with almost 64% of the overall sales. However, the iMT technology has not found too many takers with only about 26% opting for this version.

Kia Sonet is currently available in India at a starting price of ₹6.79 lakh (ex-showroom). It rivals Maruti Suzuki Vitara Brezza, Hyundai Venue, Mahindra XUV300 and Tata Nexon among others in the subcompact SUV segment.