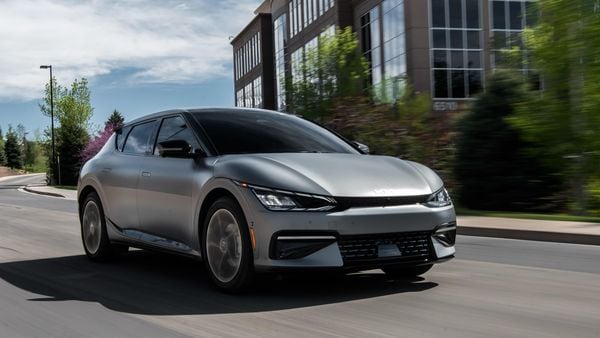 Kia EV6 has an official range of nearly 500 kms on single charge according to the EPA ratings.

Days after Hyundai Motor revealed its EV plans for India, the Korean carmaker's sibling Kia has also announced that it will come up with a detailed India-specific electric vehicle strategy soon. The announcement was made during the launch of Kia's new Carens MPV on Thursday.

Hardeep Singh Brar, Vice-President and Head of Sales and Marketing at Kia India, said that the strategy will be revealed some time next year. "We are looking at all the multiple angles and somewhere next year we will announce our EV strategy," he said.

Kia currently offers the EV6 electric SUV, which is a technical cousin of Hyundai's Ioniq 5 electric SUV, in the global markets. It recently received an official range of more than 490 kms in a single charge, according to EPA ratings. It is almost similar to what Hyundai Ioniq 5 offers.

Earlier this month, Hyundai had announced that its will launch as many as six electric cars in India in the next six years. Hyundai currently offers the Kona SUV as its only electric offering in India. Hyundai has already showcased the Ioniq 5 EV and is likely to drive it in to India soon.

Besides the EV6, Kia also offers two other electric cars in global markets. Niro EV is one of Kia's oldest electric models. The carmaker also offers an electric hatchback called Soul EV. After the launch of the EV6 model, Kia now aims to become a major player in the EV segment with several new, stand-alone E-GMP-based electric cars in coming days.

Both Hyundai and Kia are likely to look at some of the models on sale in India to try and convert them in to electric cars in the future. However, there are no confirmation on which of these models will be used for electrification yet. “Currently, we are studying because there are multiple factors...like pricing, range, charging infrastructure," said Brar.

The E-GMP platform meant for electric cars from the Korean carmaker is likely to be used for India too. It is evident from the Ioniq 5 and EV6 models, which share a lot of similarities with each other. However, Kia said that it will not go for alike models with Hyundai. "At the backend yes we have lots of synergies but when we go to the market place we play our own game. They have their line-up, we have ours," said Brar.