Kia Carens promises to marry the practicality of an MPV with the style of an SUV. Kia says the focus has been on safety, premium features and a spacious cabin.
By : Shubhodeep Chakravarty
| Updated on: 16 Dec 2021, 13:55 PM 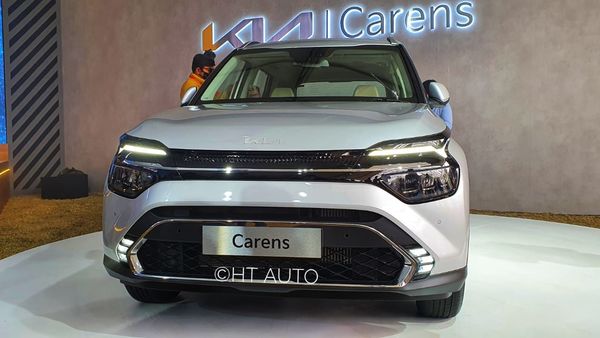 Carens is the fourth product from Kia in India, after Seltos, Carnival and Sonet.

Kia Carens made its world premiere on Thursday and will be the fourth product from Kia here after the Seltos, Carnival and Sonet, once officially launched. The three-row Carens from Kia India is looking at finding favour among larger families who would still prefer an SUV body type in a vehicle that is loaded with features.

Kia Carens is set to go head on against the likes of Hyundai Alcazar, Tata Safari and Mahindra XUV700. All of these three cars were launched in India just this year and are looking at creating inroads in the sub- ₹20 lakh, three-row SUV segment that, many feel, has a lot of growth potential. “We felt that there is no product in the country that offers a premium yet spacious character," said Tae-Jin Park, MD and CEO of Kia India.

Say hi to #KiaCarens. It made its world premiere today!!

It promises to marry the practicality of an MPV with the style of an SUV. Kia says the focus has been on safety, premium features and a spacious cabin. @KiaInd @Kia_Worldwide

That Kia opted to have the global unveil of Carens here and that India will be the first home to the product also signals the importance being attached by the Koreans to the market here. Carens will be manufactured at the Kia plant in Andhra Pradesh's Anantpur. 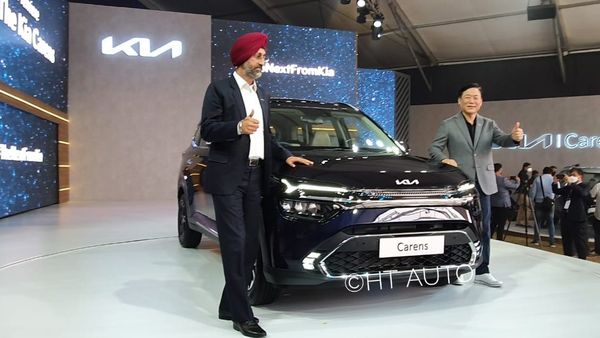 Kia Carens has the Tiger Nose grille that is found on many of its siblings. But there is a clear focus on a confluence of design elements that typically define a recreational vehicle and a conventional SUV. Large wheel arches, chrome garnish, straight lines and LED light technology define the outside.

Kia claims Carens has the largest wheelbase among three-row SUVs in its segment which translates into more space for passengers inside. The front fascia of the car gets LED headlamps, LED daytime running lights, an H shaped humanity line with sleek chrome trim, LED fog lamps flanking a large grille with chrome accents.

The rear profile too gets LED wraparound taillights, a reflector connecting them, a chunky black bumper with chrome trim etc. There are three new colours -Silver, Brown and Blue.

Kia designers specifically point to the wraparound dashboard with elements in piano black finish. There is chrome additions too on the side doors. The vehicle gets 64-colour ambient lighting.

The upholstery is in a light shade of beige and indigo, and there are plenty of storage space for bottles and even an umbrella. There is a dedicated clip to hang air fresheners from while Kia spot light in second and third row add to the experience. 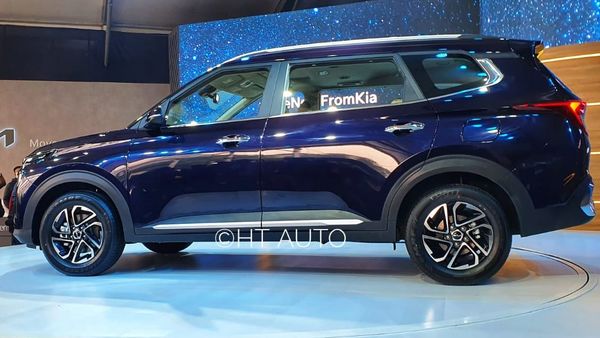 Kia claims Carens has the largest wheelbase among three-row SUVs in its segment.

The second row also gets a tray with slots to place various tech-based devices like tabs and phones. the vehicle also gets ventilated front row seats, smart air purification system and support for Kia Connect app.

The rear AC vents have a diffuser functionality for better dispersion of air. And then there is one touch tumble function on the second row seats for easier in and out for passengers in the last row.

The all-digital instrument cluster, a 10.25-inch touchscreen infotainment system with Apple CarPlay, Android Auto and UVO connect features add appeal to the premium cabin. Kia has introduced Over-the-Air (OTA) software update function to this car. The BOSE premium sound system with 8 speakers inside the cabin is another USP of this car.

Carens will get six airbags as standard and boasts of a number of safety highlights like Electronic Stability Control, Vehicle Stability Management, Hill-start Assist Control, Downhill Brake Control, Tyre Pressure Monitoring System and All-Wheel Disc brakes, among others. It gets a Driver Assistance with Hi-Secure safety package as well.

Kia Carens will be powered by both petrol and diesel engine options and will get three drive modes. There is manual, six-speed automatic and DCT gearbox options.