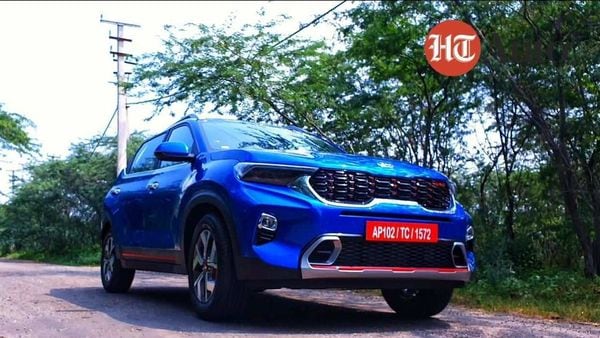 Kia is hoping to make a big mark with Sonet sub-compact SUV.

Kia Motors India is going big and dreaming bigger with its latest offering in India - Sonet. The sub-compact SUV was launched here on Friday at a starting price of ₹6.71 lakh (ex showroom, pan-India, introductory) and the company informed that it has already received 25,000 bookings for the vehicle. And while not all bookings always convert into buys, the Korean company is looking at selling 1 lakh units of Sonet in a year's time from now.

Sonet will be manufactured for the Indian market first and then exported to other countries from Kia's state-of-the-art manufacturing facility in Andhra Pradesh's Anantpur. It is the second 'Made in India' product from the car maker. While the company assures that the standard of Sonet for all markets will be the same, it is hoping this and other highlights will help the vehicle not just make a mark in its segment but take a lead. While the target of 1 lakh in a year may seem ambitious, especially considering the current market scenario, Kia is also looking at exporting 50,000 units from here to elsewhere in the same time frame.

Sonet's main rivalry is against Hyundai Venue which was first launched in India in May of 2019. Hyundai came close to the 1 lakh mark by selling 97,400 units in the ensuing 12 months with another 7,400 units sold in international markets.

The Korean siblings will be at each other's throat and while selling 1 lakh units within a year is both remarkable and not entirely impossible, muted sentiments in the automotive industry casts some doubts over Kia's plans to raid and lead the sub-compact SUV segment in the country