Kia Seltos SUV has also added disc brakes on four wheels besides adding more airbags for enhanced safety. The updates have resulted in a hike of up to ₹30,000 in the price of Seltos SUV, depending on variants.
By : HT Auto Desk
| Updated on: 03 Aug 2022, 10:16 AM 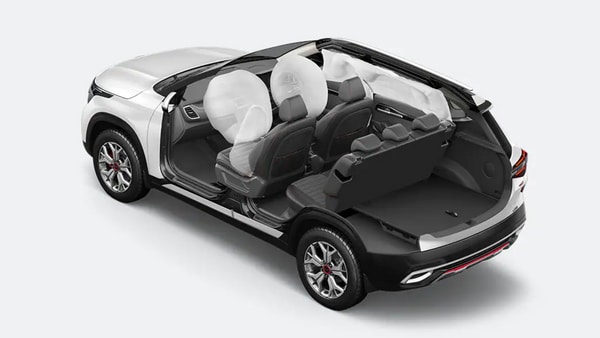 Kia India has hiked prices of Seltos SUV after adding six airbags as standard features across its range.

Kia Seltos SUV has become costlier, and safer at the same time. Starting this month, Kia India will offer its flagship compact SUV, which rivals the likes of Hyundai Creta, with six airbags as standard across all its variants. The Korean carmaker has also introduced disc brakes on all wheels. The addition of airbags as well as disc brakes in Seltos have also resulted in price hike of the SUV. Kia India has announced the new price list for Seltos SUV from August, post the latest update. Kia Seltos will now be available from ₹10.49 lakh (ex-showroom) and goes all the way up to ₹18.65 lakh (ex-showroom).

Kia India's decision to add six airbags as standard safety feature in Seltos SUV comes months after the Centre decided to make it compulsory. The government has notified that all new cars from October 1 to be fitted with six airbags. The Seltos SUV used to come with four airbags earlier. It had secured a three-star rating at the Global NCAP crash tests back in 2020, when it came equipped with only two airbags.

Besides the two updates, Kia is also offering other safety features in the Seltos SUV. These include ESC, VSM, Brake Assist, Hill Assist, tire pressure monitoring system (TPMS) and rear parking sensors among others.

Kia offers Seltos SUV in India with three engine options available in both petrol and diesel powertrain. Seltos petrol versions get a 1.5-litre and a 1.4-litre turbo unit besides the sole 1.5-litre diesel engine. The engines come mated to either a six-speed manual, a six-speed automatic or the iMT gearbox options.

Besides Hyundai Creta, Kia Seltos also rivals the likes of Skoda Kushaq, Volkswagen Taigun and MG Astor in India. Soon, Seltos will also have to stand up to the challenges to be offered by two upcoming models in the compact SUV segment in Maruti Suzuki Grand Vitara and Toyota Urban Cruiser Hyryder.