Ekonk electric hypercar produces a power output of 722hp, almost achieving the one is to one power to weight ratio.Ekonk uses a new innovative battery solution that replaces the traditional complex liquid cooling tech.
By : HT Auto Desk
| Updated on: 25 Oct 2021, 05:28 PM 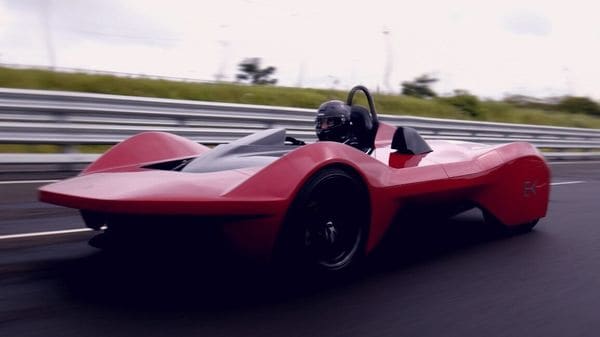 Ekonk electric hypercar's body has been fully made from carbon fiber, helping reduce it weight.

Indian EV startup Vazirani Automotive has revealed the country's fastest single-seater hypercar Ekonk, which also claims to be one of the fastest accelerating cars in the world. The spaceship-like all-electric car is also the lightest electric hypercar to be built weighing overall 738 kg.

Ekonk electric hypercar uses the EV startup's new innovative battery solution that replaces the traditional complex liquid cooling technique. It uses a technique called DiCo that enables the batteries to cool directly with the air, without needing liquid cooling. Vazirani claims that this technology makes its EV lighter, faster, safer and cost effective as well as increases its range.

The hypercar's body has been fully made from carbon fiber, helping reduce it weight. The vehicle has been designed to be one of the most aerodynamically fluid cars with one of the lowest drag coefficients for a vehicle of its kind. This is essentially the reason why its rear wheels have been covered.

Ekonk produces a power output of 722hp, almost achieving the one is to one power to weight ratio. The electric hypercar created end-to-end by Vazirani, has also been tested at the recently inaugurated Naxtrax high-speed vehicle testing facility near Indore. It achieved a top speed of 309 kmph and a 0-100 kmph acceleration of 2.54 seconds.

The data and technical learnings derived from Ekonk will be implemented by the company on the production version of Shul, India’s first hypercar concept that was revealed at the Goodwood Festival in the UK. Vazirani might later come up with a limited series production of Ekonk for customers to purchase.

The word ‘Ekonk’ in the Indian scriptures means ‘the beginning of the divine light.’ The electric vehicle denotes the beginning of a new era for the automaker. “With the advent of electric vehicles, companies around the world have to start from a blank canvas. This is the perfect time for India to innovate, develop and pioneer this EV era," said Chunky Vazirani, Founder and CEO of Vazirani-Automotive.