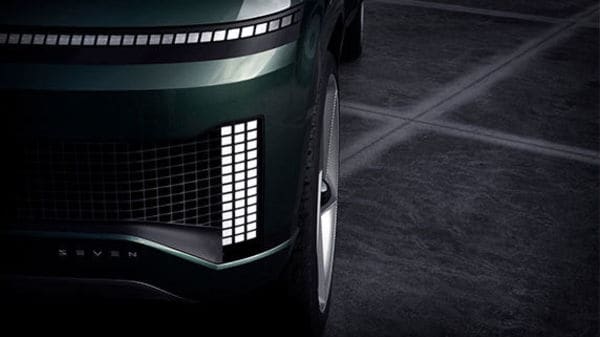 Hyundai will take the covers off a new concept electric car on November 17 at the Los Angeles Auto Show. Ahead of the official debut, Hyundai teased the concept car, called Seven Concept, with a series of images.

The Hyundai Seven Concept, a fully electric SUV, is likely to be a three-row vehicle that can seat seven people. In all likelihood, this vehicle is just a precursor to Hyundai's Ioniq 7, the latest electric vehicle in the Ioniq family after Ioniq 5 and Ioniq 6.

The teaser that the Korean firm shared about the Hyundai Seven Concept is not very revealing, but it does reveal certain key details that suggest that its design will be minimalist and futuristic. Only a bit of its front was revealed.

The image shows the front of the vehicle which has Parametric Pixel lighting. The LED light bar extended across the hood, possibly all the way. Below that are the main headlight units with parametric pixel light-emitting diodes and a contrasting front panel.

There is also a sneak peek at the wheels which has the chrome-accents on them. The exterior colour of the Seven Concept is dark green, much like the Ioniq 5 when it made debut. The lettering “Seven" appears on the bumper.

Hyundai mentioned that the interior of the Seven Concept will offer a premium and personalised lounge-like environment . It also said that sustainable materials will be used for the upholstery to "offer a refined and eco-friendly mobility experience that reflects people's changing lifestyles."

The SEVEN Concept could replicate some of the performance figures of some of the Ioniq models. The Ioniq 5 has a 225-hp power and 350 Nm torque output. On the other hand, the Korean carmaker's sibling Kia EV6 offers an impressive 576 hp of power. These figures would place the EV6 as the most capable electric crossover, even above the Tesla Model Y Performance or the Ford Mustang Mach-E GT Performance.