Hyundai Motor had earlier teased the Ioniq 6 EV through official sketches a few days ago. It shares the same Electric Global Modular Platform (E-GMP) with Ioniq 5, the Korean carmaker's first fully-electric vehicle.
By : HT Auto Desk
| Updated on: 23 Jun 2022, 10:31 AM 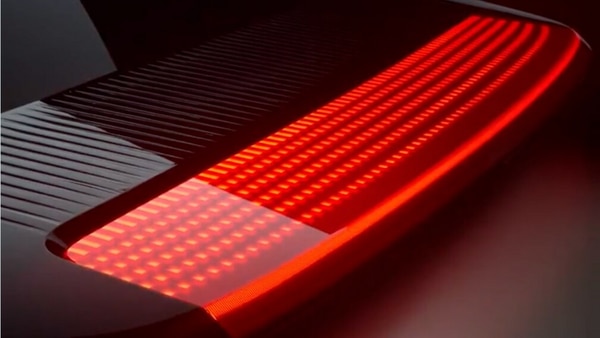 Hyundai Motor has released the first official image of the Ioniq 6 EV. It has teased the LED connected taillights which will come with patterns.

Hyundai continues the teasing its second EV, the Ioniq 6, ahead of its global unveiling later this month. After sharing sketches of the upcoming Ioniq 6, the Korean carmaker has now shared a first glimpse at the actual electric car. A new teaser, which is the first in a series of six teasers to come in the next few days, reveals the looks of the taillights of the electric vehicle.

The short video shows the LED connected taillights at the rear which also has patterns on it. Hyundai says, “With aesthetical and aerodynamical design, Ioniq 6 is where your life changes. Ioniq 6, with a silhouette we’ve only dreamed of, is shaped with glass-like, transparent textures that reflect light exquisitely. It will connect you to another dimension, and evoke a new era."

Hyundai Motor had earlier teased the Ioniq 6 EV through official sketches a few days ago. The teaser sketches revealed that the Ioniq 6 EV will get a streamlined silhouette with clean, simple lines and will have a sophisticated and aerodynamic form. Hyundai stated the design has been done keeping in mind both the aesthetic and functional needs of customers in the electric mobility era.

The Hyundai Ioniq 6 will share the same Electric Global Modular Platform (E-GMP) with Ioniq 5, the Korean carmaker's first fully-electric vehicle. This is the same platform Kia also uses for its first electric car - the EV6.

Hyundai Ioniq 6 electric sedan is likely to come equipped with a 77.4 kWh lithium-ion battery pack and is expected to get both single motor and dual-motor setup. The latter is expected to churn out maximum power of around 300 horsepower. Hyundai may also offer an N variant of the Ioniq 6 electric sedan, which is likely to share its characteristics with the Kia EV6 GT.

As far as charging capacity is concerned, Hyundai Ioniq 6 is likely to come equipped with an 800-volt technology and could withstand a load of up to 240 kW.