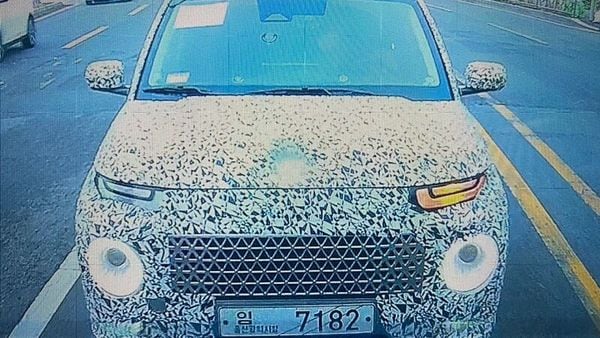 Hyundai AX1 comes with a contemporary design that is similar to Venue and Kona. (Image: AutoSpy)

Hyundai AX1 micro-SUV seems to be ready for unveiling soon. A test mule of the car has been spotted testing in South Korea ahead of the official unveiling. The Hyundai AX1 is expected to go on sale in the automaker's home market South Korea first. It is also likely to be launched in the Indian market.

The Hyundai micro SUV is expected to compete with rivals such as Mahindra KUV100 and Maruti Suzuki Ignis in India. It will also compete with the upcoming Tata HBX micro SUV as well.

Being smaller than Venue, Hyundai would position the AX1 lower in the portfolio. It is expected to be underpinned by the Hyundai K1 architecture. The new generation Santro and Grand i10 Nios too are based on the same platform.

The spy shots published by AutoSpy reveal the Hyundai AX1's quirky exterior design. It looks a bit similar to the other contemporary SUVs such as Venue and Kona. The body shell looks a bit boxy and compact. There are round-shaped LED headlamps with LED daytime running lights positioned at the corner tips of the bonnet. Other design elements include a flat bonnet, large glasshouse, round-shaped taillights located at the rear bumper.

The Hyundai AX1 micro SUV is likely to get a host of features inside the cabin. The top trims of the upcoming micro SUV are expected to get an 8.0-inch touchscreen infotainment system with Android Auto and Apple CarPlay, cooled glovebox, rearview camera, power-adjustable mirrors etc.

Hyundai is tight-lipped about the powertrain of the micro SUV. It could get the same 1.2-litre four-cylinder engine of Grand i10 Nios under the hood. The engine is capable of producing 83 hp of power and 114 Nm of torque.