Mahindra XUV700 has a whole lot of options in terms of engine, transmission, seat layout and more which could see it throw up a challenge to several rivals.
By : Shubhodeep Chakravarty
| Updated on: 24 Aug 2021, 11:32 AM The move to go at rivals with both petrol and diesel engine options in the XUV700 could ensure that Mahindra is able to target a wide field of rivals.

Mahindra XUV700 was officially launched in the Indian car market earlier this month and could well emerge as the biggest unveil in the passenger vehicle segment of the calendar year. After a long time spent under camouflage and on test runs, Mahindra XUV700 launch has marked the start of an intense SUV war here, one that could see it take on a mile-long list of rivals.

Mahindra is looking earnestly at XUV700 to help it not just regain lost ground in the SUV segment but put it firmly on top of the under ₹20 lakh segment. And even if the price of the top AX7 variant hasn't been revealed, the initial price structuring has set the cat among the pigeons. Whether it is in terms of pricing or the engine and transmission choices or even the seat layouts, Mahindra XUV700 clearly is gunning for glory and takes aim at a long list of rivals, from five-seat SUV options like Hyundai Creta, Kia Seltos, Tata Harrier, MG Hector, Skoda Kushaq and Volkswagen Taigun to the three-row newbies Hyundai Alcazar and Tata Safari. While a few are also pegging the power-packed engine options inside the XUV700 against those in the Toyota Fortuner and MG Gloster, the yawning price difference itself won't make these comparisons quite fair.

So how and why is Mahindra XUV700 looking at fighting against a wide field of rivals?

Mahindra XUV700 is made available with both petrol as well as diesel engines. Why? Well, because Mahindra can. Although demand among large-sized SUVs still favours the diesel motor overall, the XUV700 gets an mStallion 2.0 turbo-petrol unit that belts out a very impressive 200 hp and has 380 Nm of torque. It is the same, but re-tuned, engine that also does duty inside the 2020 Thar but in this vehicle, it has max power output of 150 hp. But if it is diesel that one is after, the trusty 2.2-litre mHawk diesel unit roars to salute. It has 182 hp on offer and two state-of-tunes means the torque figure goes all the way to a chest-thumping 450 Nm.

Both the petrol as well as diesel engine options come mated to either a six-speed manual or a six-speed AT unit.

While almost every single SUV rival under ₹20 lakh does offer a toss up between manual and automatic transmission, some are only offered with petrol engines - Taigun and Kushaq for instance, and some with only diesel engine like the Tata Harrier and Safari. Creta, Seltos and Hector are up for grabs in either of the two.

XUV700 replaces XUV500 in the market. The XUV500 was a fairly successful model but one of its ‘drawbacks’ was the lack of a third row despite its rather large dimensions. No such worries in the XUV700 as it gets three rows of seats, apart from a five-seat layout. 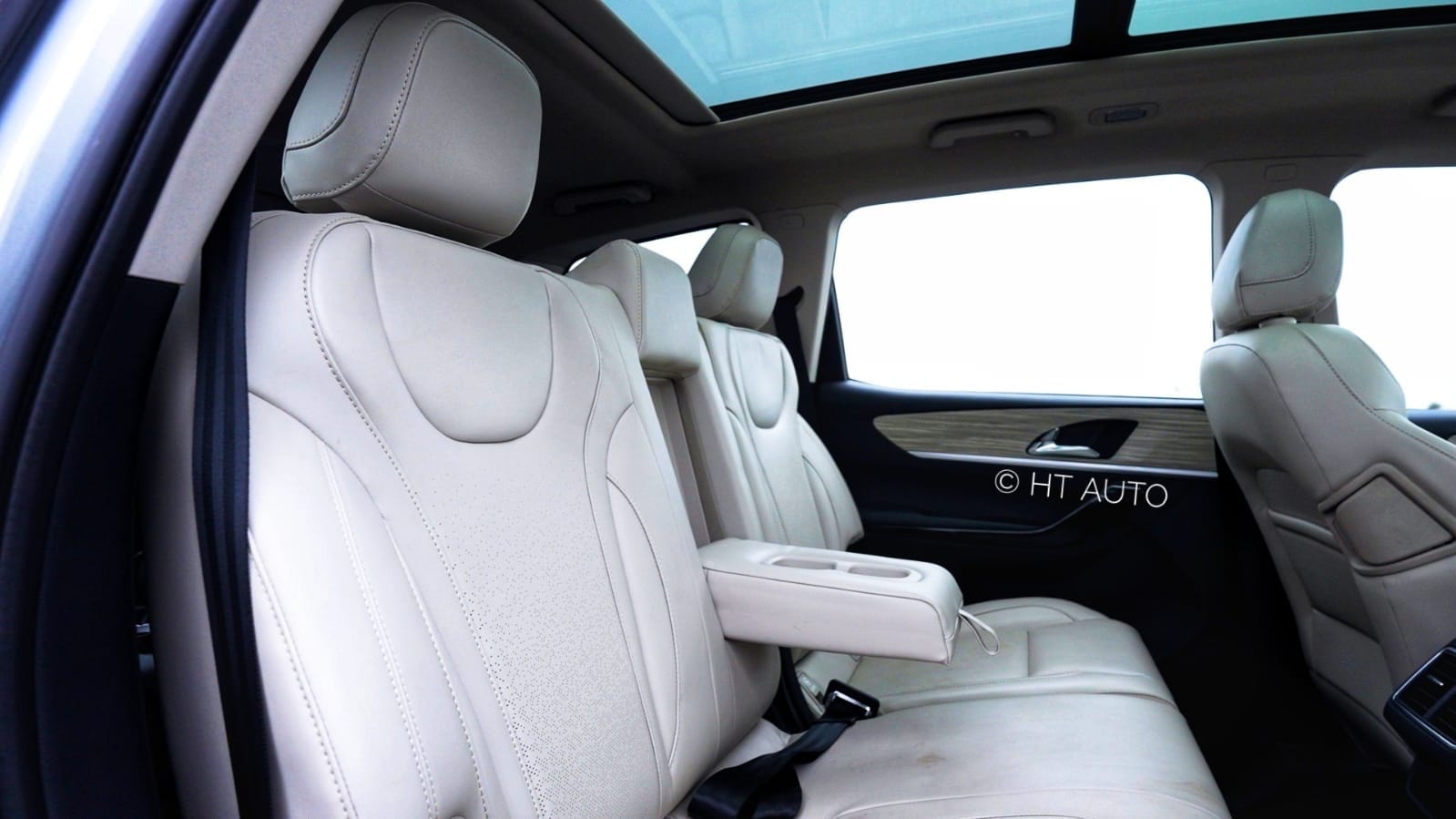 In the seven-seat layout inside XUV700, there are bench seats in the middle row. (HT Auto/Sabyasachi Dasgupta)

Unlike Alcazar which offers Captain Seats in the middle, the XUV700 makes use of bench seats in the middle row but even still, there's much premium-ness on offer. Space in the final row is just about adequate but the large windows and the skyroof help negate any constructive feel.

That XUV700 is the only car in its segment to offer both five and seven-seat layout - assuming one considers MG Hector and Hector Plus as two separate models, the Mahindra XUV700 does indeed possess an ace up its sleeve.

The Koreans have mastered the art of offering a wide variety of features, some taken down from cars featured in the luxury segment. It has been one of the major reasons for the success enjoyed by the likes of Creta and Seltos in the Indian market. The feature list inside XUV700 is also quite exhaustive and the vehicle boasts of AdrenoX system, 12-speaker Sony system with 3D sound, largest-in-segment sunroof, large 10.25 inch screens and electronically-adjustable driver seat with memory function. There is also support for Alexa voice integration as well as auto door handles. 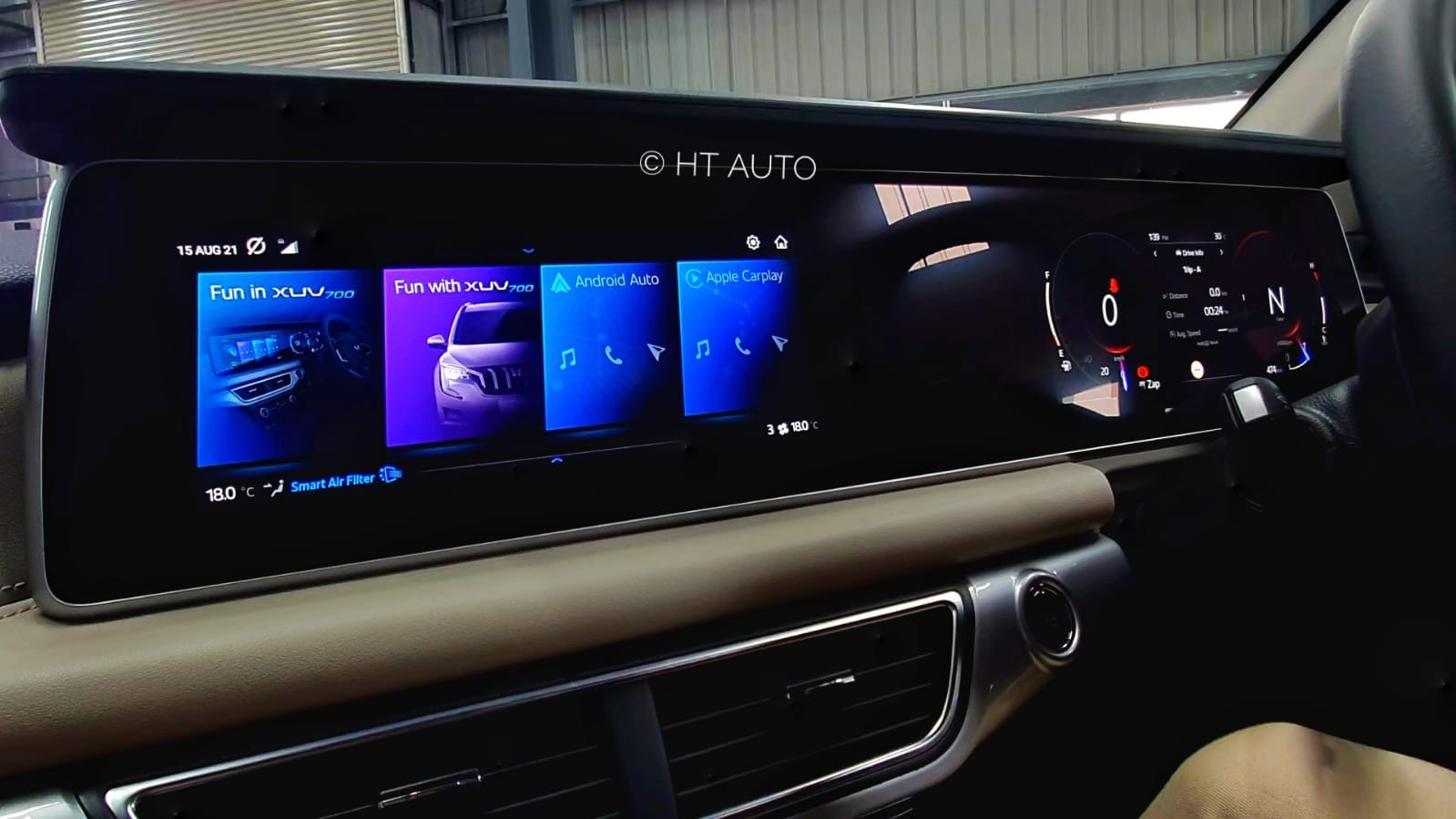 On the inside, the XUV700 gets two 10.25-inch display screens -one is the main infotainment unit and the other is the all-digital driver display. The entire unit's surface is claimed to be shatter-proof and made by Asahi Glass in Japan. It gets an all-new AdrenoX interface and Alexa Voice Command.  (HT Auto/ Sabyasachi Dasgupta)

Some features like ventilated seats and cooled glovebox may be missing but XUV700 still impresses with its list of comfort and convenience features.