The name of the SUV is DaGou in locka language, which literally translates to Big Dog.
By : Sabyasachi Dasgupta
| Updated on: 19 Jun 2020, 13:25 PM 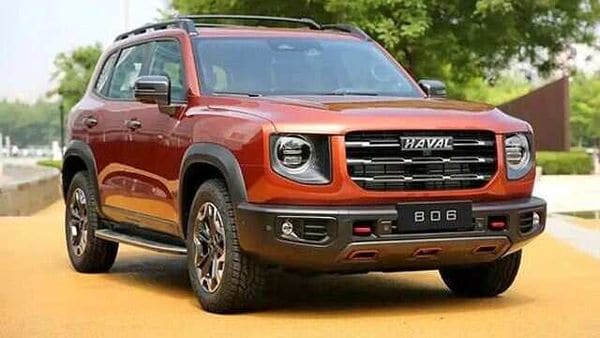 Haval has unveiled its new SUV named as Big Dog

Chinese car manufacturer Haval has unveiled its new off-road SUV model, the new DaGou. The official name of the SUV literally translates to Big Dog. The company aims to position the vehicle as an 'urban SUV and a hardcore off-road vehicle'.

The HAV Big Dog model will attract attention with its design, which also has a retro appeal to it. The front appears a bit boxy in shape, quite different from the coupe-type SUVs that have become sort of a trend in recent years.

On the sides are black aluminium all-terrain wheels, and roof rails ideal for outdoor use. The design at the rear adopts a unique inverted L-shaped taillamp, equipped with a plastic bumper with a rear skid plate.

The wheelbase, measuring 2,738 mm, makes it bigger than the new Toyota RAV4. The minimum ground clearance is 200mm, which is quite adequate to take out the vehicle for off-road use.

On the inside, the Haval Big Dog SUV gets orange accents scattered all over the cabin. The interior of the SUV gets distinct styling cues. Noteworthy is the lack of a conventional gearshift lever or joystick. Instead there is a rotating dial to control the vehicle on different tarmacs. There are no more details available about the new Haval Big Dog SUV. But based on what is already revealed, the SUV is likely to take on other big off-road SUVs like the Toyota Land Cruiser.