Home Auto Cars News Formula One Is A Passe, Get Ready For Flying Electric Car Racing With Airspeed

Formula One is a passe, get ready for flying electric car racing with Airspeed 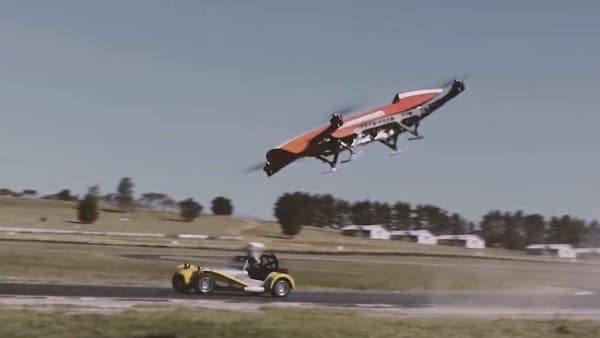 Flying car races, which usually only exist in games on computers and films, will soon become a reality. Airspeeder, the first motorsport series for flying cars that will be the organiser. The race is expected to be held this year.

Quoting Euronews Living, founder of the race, Matt Pearson said, they have big ambitions to accelerate the sustainable transportation revolution.

Airspeeder - the first flying car sports program - announced that it had raised enough money to start racing electric, but this time flying, vehicles.

An autonomous vehicle from the Airspeeder program has already debuted at the 2019 Speed ​​Festival in the UK and is currently testing unmanned flights. The shown vehicle weighs about 500 pounds and uses a 500 kWh capacity interchangeable Li-Po battery pack during the race, which is useful since one pack lasts only 15 minutes. The 32-horsepower, battery-powered engine achieves speeds that can go up to about 200 kilometers per hour, at a height of 4.5 to nearly 40 meters.

The Airspeeder Mk IV (as the fourth version of this vehicle is called) is the world's first piloted octocopter. It has eight propellers or four double rotors with propellers at the top and bottom. The design of the cabin is striking, with a clear inspiration from Formula 1 of the 1960s.

These electric flying cars have four electric motors of 45 CV each (170 CV in total) for a weight of 250 kg. It is 4 meters long and less than 1 meter high. The width, including the motors, is almost 3.5 meters.

After the restriction related to the coronavirus is lifted, Speeders (flying electric cars) will be further tested. A trial team recruited from the US Air Force and Martin Aviation was responsible for the MK3 prototype, which will be tested in the Mojave Desert, California.

It will be curious, to say the least, what these manned octocopters are capable of. It still sounds like science fiction, and yet they are just around the corner. In addition, for fans of Star Wars, it is surely a joy to see that the Airspeeder begin to become a reality.