The van is the first in this category offering crash and rollover compliance with air bags for driver and co-driver.
By : PTI
| Updated on: 22 Jan 2020, 07:30 PM 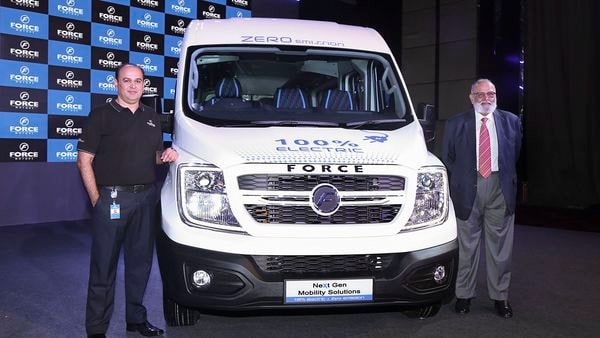 Force Motors, the market leader in the inter-city commuter vans space, on Wednesday unveiled an all new premium model of its popular van Traveller with BS 6 diesel powertrain and electric engine options, developed over the past four years with a project investment of over ₹1,000 crore.

The yet-to-be named 18-seater van will begin commercial production towards the end of the year and will be showcased at the forthcoming Auto Expo in Delhi, the company said.

Presently christened T1N, the van will be export-focused and the Firodias, who were the pioneers of three-wheeler autorickshaws in the 1950s, will begin shipping the van, which boasts of 25 industry-first features, to the Gulf markets where it is already present, Prasan Firodia, managing director at Force Motors and the son of company chairman Abhay Firodia, told PTI.

The other focus market will be North Africa, South Africa, Asean, South America and the Saarc region, he said, adding from a regulatory compliance perspective it can be sold in Europe, the Far East and the US.

Firodia refused the reveal the price or the battery range saying the vehicle in not ready for commercial production. Its present 18-seater Traveller is priced at around ₹15 lakh.

Whether a higher pricing will be detrimental in a falling market like the present one, he said, "their primary focus will be exports as we want to use this van to be our springboard to become a global automotive company".

He also ruled out cannibalisation of the existing models saying there is market for every model as has been their experience with Trax and Traveller so far which offer 9-seaters to 26-seaters now.

The Pune-based company is the largest van maker in the country with 68 per cent market share and nets almost 50 per cent of its income from its engine supply business with Mercedes and BMW now.

In the quarter to September, Force Motors reported a 5.6 per cent drop on revenue at ₹818 crore while its net income plunged 84 per cent to ₹4.2 crore.

"The T1N was triggered about four years ago with the objective to develop a truly world-class shared mobility platform that would be ahead of current offerings and raise the bar in terms of passenger comfort, convenience and safety to international standards," the senior Firodia said while unveiling the project.

The junior Firodia said the company has invested more than ₹1,000 crore in developing the new van, which will be built at its Pithampur near Indore plant where it is building an entirely new body shop with robotic and laser welding facilities with an installed capacity of 35,000 units.

"We are the first domestic auto company to develop an all grounds-up next generation monocoque panel van platform, which will host many more models going ahead," the chairman said.

The managing director later told PTI that over the next two years, the new platform will come out with two new models in the shared mobility space and those will be unveiled at the forthcoming Auto Expo in Delhi.

On the capex plan, he said they have lined up around ₹600 crore for the next two years to develop these models.

The van is the first in this category offering crash and rollover compliance with air bags for driver and co-driver even though current laws does not mandate them. The van boasts of many more features developed in consultation with leading technology specialists and domain experts from Italy, Spain, Britain, Germany, Japan and the US.