The Ferrari loses control on a bridge in London, narrowly missing pedestrians and cyclists here.
By : HT Auto Desk
| Updated on: 04 Nov 2020, 02:47 PM 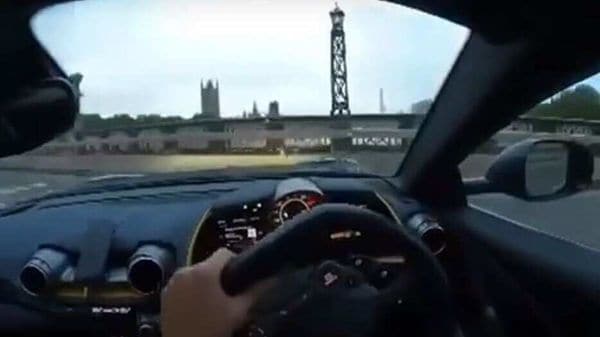 Screengrab from the video of the incident involving a Ferrari 812 Superfast posted on Youtube by Supercar Hunter.

Automobile accidents are unfortunate even if common around the world but when a swanky supercar is wrecked, the collective groan is a little louder. One such crash involved a Ferrari worth over $300,000 which reportedly lost traction in London and ended up sporting an extensively damaged exterior as well as damage to the cabin. The incident was captured by a camera mounted inside the vehicle.

The video of the accident from the point of view of the cabin of the Ferrari shows the 812 Superfast first stopping at a red signal on a London street. As the signal turns green, the supercar carefully takes a left turn to get onto the city's Lambeth Bridge. The driver picks up pace on the bridge but suddenly loses control of the 786-bhp Ferrari which swerves to the other side of the road before crashing to the side of the bridge. The airbags deploy almost instantaneously.

It is reported that there were pedestrians and cyclists on the bridge at the time of the accident but that no one was injured. While the police is investigating the incident, it is not clear if the driver had opted to switch off traction control on the supercar or if there was a mechanical problem.

It is also reported though that there was a 20mph speed limit on the road where the incident took place and that the Ferrari was clearly beyond this limit.

The video of the incident has gone viral on social media with many highlighting why such powerful vehicles need that extra bit of caution at all times when being driven.

The identity of the driver has not been made public.