Donald Trump visit: Agra residents eager to catch a glimpse of the Beast

The US Presidential limousine, nicknamed the Beast is based on a Cadillac. It has an 8-inch thick body armour plating and bulletproof windows which insulate the President from all sorts of threats.
By : PTI
| Updated on: 24 Feb 2020, 04:18 PM 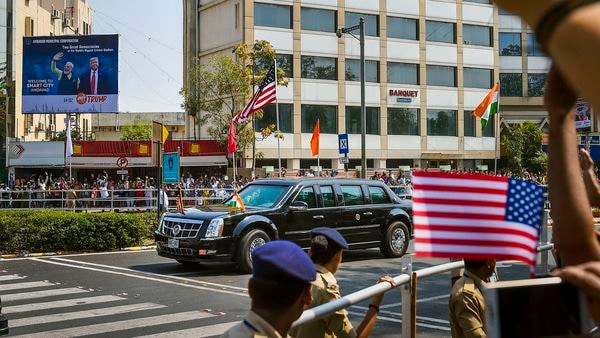 Ahmedabad: People wave as the convoy of U.S. President Donald Trump passes by during the roadshow, in Ahmedabad, Monday, Feb. 24, 2020. PM Modi and U.S. President will participate in a roadshow from the airport to Sabarmati Ashram and from there to Motera cricket stadium for Namaste Trump event. (PTI Photo/Kunal Patil)

As the city awaits the arrival of US President Donald Trump for his maiden visit to Taj Mahal, many residents are eager to catch a glimpse of 'the Beast' -- the luxurious armoured vehicle of the American president.

The US Presidential limousine is expected to be part of Trump's convoy. However, district authorities have kept the details on the 'Beast' under tight wraps.

Also Read: What makes Donald Trump's Beast the safest car in the world

Days ahead of Trump's visit, a nearly 50-year-old iron bridge, which falls on the 13-km route designated for the convoy from Kheria Air Force station to Oberoi Amarvilas, had caused some hiccups for the district administration, as only 'light vehicles' were permitted to cross the bridge.

"That restriction on the bridge for use by only light vehicles was kept as a precautionary measure six months ago. But, after the announcement of President Trump's visit, we got the strength and capacity of the bridge checked multiple times and it is fine. It has a load capacity of 11.4 tonne," a senior official said.

All concerns were "discussed threadbare" and there is "no issue" on any part, he said.

Another senior official said, the district administration was asked to check the capacity of the bridge, and "they had given clearance from their side a few days ago".

The bridge in the middle is made of iron and stands over railway tracks, while two flanks on either side (up and down sides) are under the PWD, officials said.

Trump, his family and the members of the delegation accompanying him, will reach the city on Monday, and will move to golf carts from there to reach the 17th century monument.

"The advanced security liaison team, consisting of members from district administration, MEA, CISF, NSG and US Secret Service had discussed all concerns threadbare, and the route was checked multiple times.

"So, things are fine and President Trump will have a pleasant visit and enjoy the beauty of the Taj in the evening," the senior official said.

When asked if the Beast will be used to ferry Trump from the air force station, he did not divulge details and only said,"There is excitement about it in people, but let's wait".

The US Presidential limousine, nicknamed the 'Beast' is based on a Cadillac. It has an 8-inch thick body armour plating and bulletproof windows which insulate the President from all sorts of threats.

Ever since the assassination of President John F Kennedy who was riding an open top Lincoln Continental, the United States has pulled out all stops to make every succeeding presidential vehicle virtually impenetrable.

The armoured luxury vehicle's doors weigh similar to those on a Boeing-757 aircraft.

People of Agra are excited about the visit of Trump and also curious to see his ultra-luxe 'Beast'.

"I had seen it on TV when President Obama had visited India in 2015. It created so much flutter in the crowd when it moved on Rajpath in Delhi during Republic Day celebrations. We also want to catch a glimpse of the Beast," said Rahul Kumar, a college student who stays in Tajganj area.

Rakesh Kumar, 46, who runs a 'petha' shop on Fatehabad road that falls on the convoy route, has put up a banner above his shop which says – 'Welcome to India Donald Trump, and shows pictures of Trump and Prime Minister Narendra Modi'.

"I am very happy about Trump's visit. It is an honour for us Indians, and especially for people of Agra as he has chosen to visit our city too to see the Taj Mahal. We are hearing about his 'Beast' car, and hope will be able to see that famous vehicle".

Even many auto-rickshaw drivers said they want to catch a glimpse of the Beast, amid a very high-level of three-layered security thrown in Agra.

Satyendar Shukla, an auto-rickshaw driver said,"I drive a humble tri-wheeler, but I have heard about his super vehicle. And, I hope Agra will get to see the Beast.