While Seltos continues to rake in volumes for Kia in India, Carnival too has received a positive response.Kia, in terms of passenger vehicles' sales, has taken the third spot in the month of February.
By : Shubhodeep Chakravarty
| Updated on: 02 Mar 2020, 06:21 PM 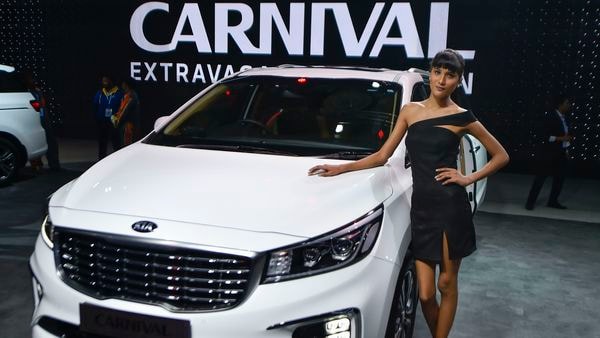 Carnival (in pic) and Seltos are the two offerings of Kia Motors India currently.

Kia Motors on Monday announced it had sold a record 15,644 units in the month of February, powered predominantly by Seltos but aided by the newly-launched Carnival MPV. The sales figure helped Kia become the third largest car maker in the country for the month, in terms of passenger vehicle sales.

Kia, in a press release, said it had sold 14,024 units of Seltos and another 1,620 units of Carnival which was launched at ₹24.95 lakh at Auto Expo last month. While almost every other major car makers in the country registered a negative sales trend, Kia managed to jump 1.3% in February as against a month earlier. "I am extremely delighted with the response and acceptance Indian customers have given us," said Kookhyun Shim, Managing Director & Chief Executive Officer, Kia Motors India. "Our latest offering the Carnival has been received well and this has helped adding to our sales numbers.This not only testifies the quality, reliability and design prowess of our vehicles, but also gives a hint that India is evolving and Indian customers now don’t just settle but opt for better product offerings."

Kia made India debut with Seltos when the SUV was launched in August of 2019. The car received a massive response thanks to its looks, performance and long list of features. There has been a considerable waiting period for the vehicle with Kia consequently opening a massive plant in Telangana which would help it meet with the rush in demand.

The Carnival MPV too had received a positive response despite its rather expensive price tag. The car will also be manufactured at Kia's Anantpur facility (in Telangana) and is available in Prestige and Limousine variants. Powered by a 2.2-litre diesel engine, the Carnival has 204 hp power and torque figures of 440 Nm. It stands 5,115 mm in length, 1,985 mm in width, 1,740 mm tall and has a wheelbase of 3060 mm.

Kia is next planning to drive in the Sonet compact SUV which was showcased in concept form at Auto Expo 2020. The car has managed to generate a fair bit of excitement and could give a tough fight to the likes of Hyundai Venue and Maruti Suzuki Vitara Brezza, once launched some time late 2020.