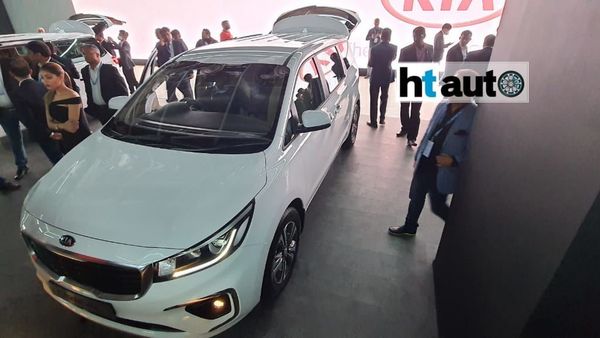 Carnival MPV was launched by Kia Motors at Auto Expo 2020 in Greater Noida.

Carnival, South Korean carmaker Kia's second offering in India, was officially launched by the company at the 15th Auto Expo. It is priced at ₹24.95 lakh for the starting seven-seater (Premium) variant. The eight-seater variant will cost ₹25.15 lakh.

The MPV will also come in Prestige and Limousine variants, with starting prices of ₹29.95 lakh and ₹33.95 lakh respectively.

While Seltos, the company's first offering, continues to be highly popular, Carnival seeks to go into uncharted territory where Toyota Innova has called the shots for years.

The price launch of Kia Carnival MPV at Auto Expo 2020.

Being touted as a VIP MPV, Kia has positioned Carnival as a premium vehicle with stylish looks and fully-loaded interiors. Under the hood is a capable 2.2-litre diesel engine which, while a gamble, promises unmatched performance. With 204 hp power and torque figures of 440 Nm, the Carnival could also be quite fuel efficient. Innova Crysta, in contrast, is offered in both petrol and diesel. The 2.4-litre petrol Crysta (AT) has peak power and torque figures of 147 bhp and 343 Nm.

On the outside, Carnival has projector headlights and DRLs, Kia's signature Tiger-nose front grille and a tall profile.

Carnival is being offered with an eight-speed transmission option and is filled to the brim with convenience and luxury features.

Carnival also offers much more boot space with 540 litres compared to 300 litres in the Innova Crysta (all three row seats standing in both cars).

The car will be manufactured at Kia's brand new facility in Anantapur, Andhra Pradesh.