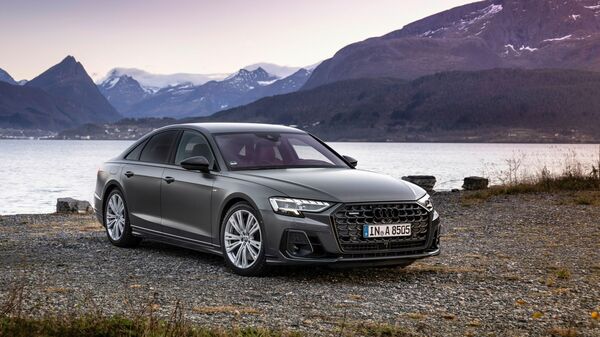 The Audi A8 is offered with three hybrid engines, including the 462 hp plug-in unit capable of traveling up to 61 km with zero emissions.

Audi has introduced the A8 facelift sedan with hybrid powertrain. The fourth generation Audi A8 is the first from the German carmaker to get 48 Volt mild-hybrid technology, besides other updates.

The new Audi A8 comes with host of changes on the outside. The design is now much sharper than before. These include a wider single frame front grille with three-dimensional chrome inserts, redesigned air intakes, lower roofline, and large wheel arches.

The new Audi A8 also gets new set of LED digital Matrix headlamps. For the first time, the Audi A8 has optional Digital Matrix LED headlights - launched with the Audi e-tron Sportback zero-emission model. It consists of a chip equipped with about 1.3 million micro-mirrors capable of changing orientation up to 5 thousand times every second.

On the inside, the A8 gets a host of updates. These include LED ambient lighting, seats with massage functionality, two new 10.1-inch monitors for passengers seating in the second row, a rear central control unit with remote control, a 5.7-inch OLED screen, including the temperature of the air conditioning and more.

The 2022 Audi A8 gets over 40 driving assistance systems, including the parking pilot which allows to park the vehicle remotely through the MyAudi app. The sedan also gets Audi pre sense 360-degree system, which works in synergy with the active suspension, is able to lift the car up to 8 cms in the event of a risk of side impact. The cabin of the Audi A8 facelift also comes with several changes which include LED ambient lighting, seats with massage functionality and entertainment screens for the second-row passengers.

The biggest change comes under the hood. Audi is offering the new A8 with three hybrid powertrain modes combined with eight-speed automatic transmission and quattro all-wheel drive. The 3.0-litre Tdi quattro tiptronic model with the V6 turbodiesel unit comes with a 48 Volt mild-hybrid technology. The engine can generate output of 286 hp and 600 Nm of torque. The output goes up to 571 hp with the V8 turbocharger unit. The Audi A8 plug-in hybrid has a total power of 462 hp - 13 hp more than the previous generation - and a torque of 700 Nm. It can sprint from zero to 100 kmph in 5.9 seconds and has a top speed of 250 kmph.

The 14.4 kWh lithium-ion battery allows the A8 to travel with zero emissions up to 61 kms at a speed not exceeding 135 kmph. The battery can be recharged at a maximum power of 7.4 kW in alternating current (AC). By drawing energy from an industrial type socket (230V and 32A), it is possible to fully recharge the car in 2.5 hours.