Tata Motors teased the four SUVs in their Kaziranga edition, inspired by the one-horn rhinos found in Assam, on its social media handles recently.
By : HT Auto Desk
| Updated on: 16 Feb 2022, 11:33 AM 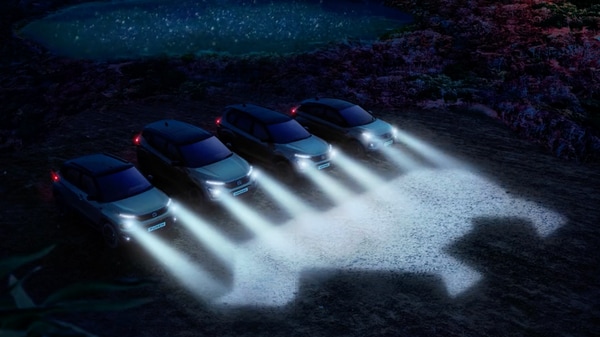 Tata Motors plans to expand its Kaziranga edition to all the four SUVs in its lineup. The carmaker had teased the one-off Punch Kaziranga edition recently which will be auctioned during the IPL 2022 season. Now, in a new teaser, Tata Motors has showcased Nexon, Harrier and Safari edition also included in the lineup.

Tata Motors, which is the official title sponsor for the Indian Premier League (IPL) this year, had announced the special edition inspired by the one-horned rhinoceros found in the Kaziranga National Park in Assam. Though there is not much change in features or specifications, this edition will carry several motifs and easter eggs with the one-horned rhino around the cars.

The teaser video shared on social media handles of Tata Motors shows the four SUVs lined up as their headlights form a silhouette of the rhino. The video is posted with a single line message that reads ‘The call for the #Untamed begins!’ However, it does not say when to expect the full range of Kaziranga edition of SUVs. It also does not specify if the Nexon, Harrier and Safari Kaziranga edition SUVs will also be one-off units like the Punch.

The call for the #Untamed begins!

The carmaker has not revealed what specific changes will make these special edition SUVs stand apart from their standard models. However, the Kaziranga edition of the Tata Punch SUV offers some hint at what to expect. The one-off Punch edition will come with an exclusive exterior colour scheme called the Meteor Bronze. It also gets a special Rhino badge that has been placed inside the rear windscreen and glovebox. The special edition Punch will be powered by the same 1.2-litre 3-cylinder naturally aspirated petrol engine that is used in the standard model. Tata Motors is likely to do the same for the special edition Nexon, Harrier and safari SUVs as well.