The fifth-generation Range Rover seeks to be an epitome of excellence in terms of design and performance. But its opulent cabin may well be its best highlight yet.
By : Shubhodeep Chakravarty
| Updated on: 26 Aug 2022, 14:35 PM

The 2022 Range Rover is a fifth-generation model and has now been officially launched in India.

Range Rover was first introduced to the world as a robust and rugged car model back in 1970 when SUVs weren't exactly very common on global roads. The first-generation model of the Range Rover quickly stamped its dominance in markets where offered and underlined its 4x4 credentials. Every subsequent generation of the SUV has continued with the legacy of being extremely hardy but evolving with times as well. Little wonder then that evolution has necessitated a slew of changes and updates, and the fifth-generation model that has now been officially launched in India is a masterful exercise in continuing with the inherent strengths of the Range Rover while adding a mile-long list of comfort and convenience features that generously borrow from technological advancements.

The fifth-generation Range Rover continues to sit on the throne of the Jaguar Land Rover SUV lineup and while its pricing at upwards of around ₹2.40 crore (ex-showroom) clearly means this SUV is meant for an exclusive few, it is the exclusive few who are most likely to admire and appreciate all that the vehicle has on offer. And it does indeed have a whole lot on offer.

We got a chance to check out the 2022 Range Rover model and here's our first quick take on the SUV:

Some SUVs are crafted in such a way that photos may never do full justice to its sheer scale and score. And in that list, the latest Range Rover is more than likely to find a high place. I mean it is a massive car with a mammoth road presence even if just calmly parked inside a showroom.

The Range Rover has a very, very strong road presence and though many of its styling cues are a throwback to its past versions, it still has an elegantly modern appeal from all sides. The front grille, for instance, exudes class while not exactly taking up much real estate on the face. Flanking it are elegant digital LED headlight units with integrated DRLs. The animated DRLs and turn indicators also add to the sheer ‘boss-level’ character of the vehicle. There's a camera with radar on the face as well while the fog light units blend in seamlessly on the front bumper. 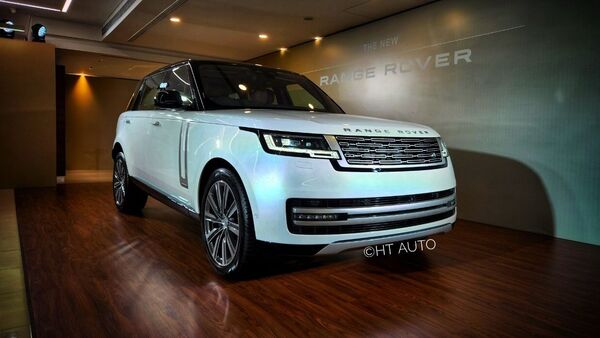 The front grille of the 2022 Range Rover reflects elegance and class in itself. It features sleek digital LED headlight units with integrated DRLs along with animated DRLs and turn indicators.

Artistic lines on a minimalist canvas are how the new Range Rover appears to have been designed and this is also amply evident on the side. The instantly recognizable three lines -- falling roofline, strong waistline and rising sill line -- give it a familiar appeal and yet, there are plenty of contemporary cues like the flush-door handles, rich alloy design and massive window areas - all without ever appearing to have been done to grab eyeballs even if eyeballs are likely to be grabbed aplenty. The minor attention to details such as soft-close doors, speed dash body character lines and a complete lack of any chrome also work in favour of the newest Range Rover. That the vehicle has a drag coefficient of 0.30 -- yes, it is the most aerodynamic SUV in the world -- is a remarkable feat too. 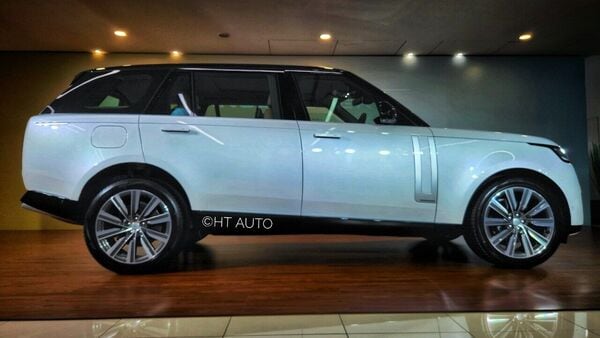 The falling roofline, strong waistline and rising sill line of the new Range Rover give the SUV a familiar appeal along with contemporary cues.

All of the emphasis on a minimalistic robust design language is best showcased on the new boat tail rear, complete with its practical split tailgate. Once opened, the tailgate reveals an absolutely massive cargo area and a stretched section makes for a cosy picnic space for two, complete with a sectional cargo floor bed area that can be pulled up to make it a backrest. But with the tailgate shut, the Range Rover has a very sophisticated appeal which is heightened by the world's first ‘hidden till lit’ LED tail lights on either side. When not activated, these appear as an artistic part of the rear design. There are two shark-fin antenna on top, Range Rover branding and gloss black colour interplay to further up the premium appeal. 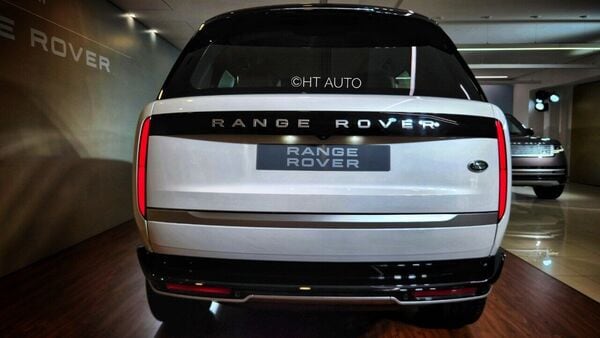 The new 2022 Range Rover SUV comes with boat tail rear which opens to massive cargo area and a stretched section that provides perfect space for two. It also sports a sectional cargo floor bed area that can be pulled up to make it a backrest.

Pull the flush-door handles towards you and open into a world that seeks to nestle you in seven-star comfort. And while there are multiple colour options for the upholstery, a 13.1-inch main infotainment screen, a 13.4-inch all-digital driver display, a 35-speaker Meridian sound system, heated and cooled seats all around, massage functionalities and more, it is a bit of a shame that this particular variant model presented to us - the Autobiography variant - is only in a five-seat set-up, unless opting for the LWB (Long Wheelbase) variant.

But if you don't exactly want to prefer packing in the in-laws for the drive, the Range Rover presents itself as much of an SUV that's meant to be driven as it is to be driven in. 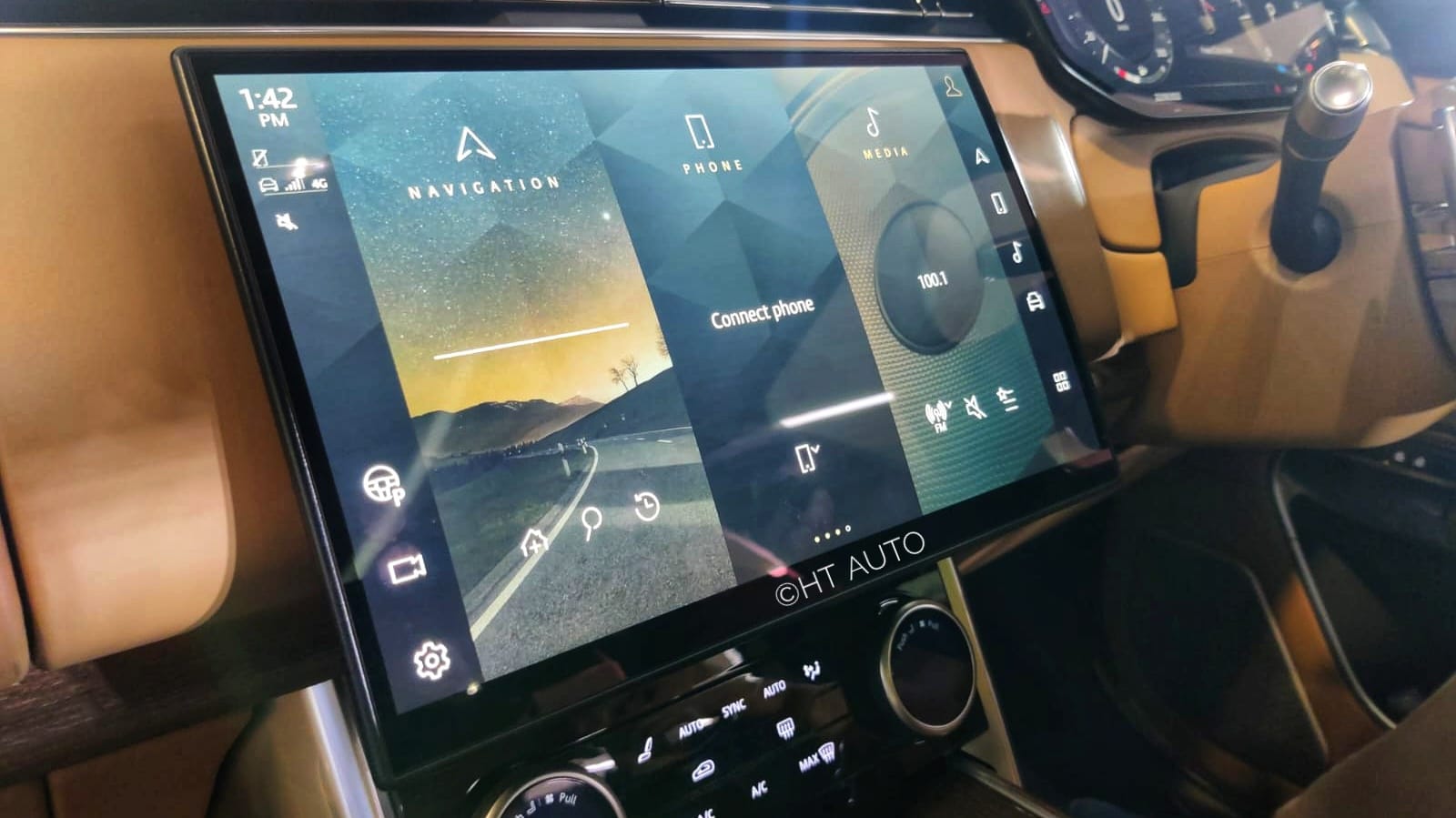 The plush interiors boast a 13.1-inch infotainment screen which is powered by Pivi Pro. One can use the screen as a command centre to access various creature comfort functionalities anywhere in the vehicle.

The 13.1-inch main screen, powered by Pivi Pro, perfectly suits the stature of the vehicle. It houses all the controls for AV and can also be the command centre from where to control the various creature comfort functionalities anywhere in the vehicle. It also puts out drive-related information which can be quite essential if taking the vehicle to the wilderness.

This is true for the driver display as well - large, bright and well-equipped to put out all relevant information from just behind the gorgeously old-school yet modern steering wheel.

You don't expect a flagship costing over ₹2.40 crore to cut corners in the fit and finish, and the Range Rover obviously doesn't. The materials used all around the car are the best that a vehicle can get at present with the seats deserving a special mention owing to just the right amount of cushioning.

The rear-seat passengers are unlikely to ever appreciate another vehicle because of the sheer indulgences at their disposal here. Whether it is the ambient lighting or the massive panoramic sunroof, the window blinds or massage functions, the customizable heating and cooling or the two 11.4-inch HD entertainment screens behind the front seat headrests - everything can be controlled using a tablet screen on the foldaway central armrest here. But unlike the tablets in some other luxury models, this one cannot be detached. 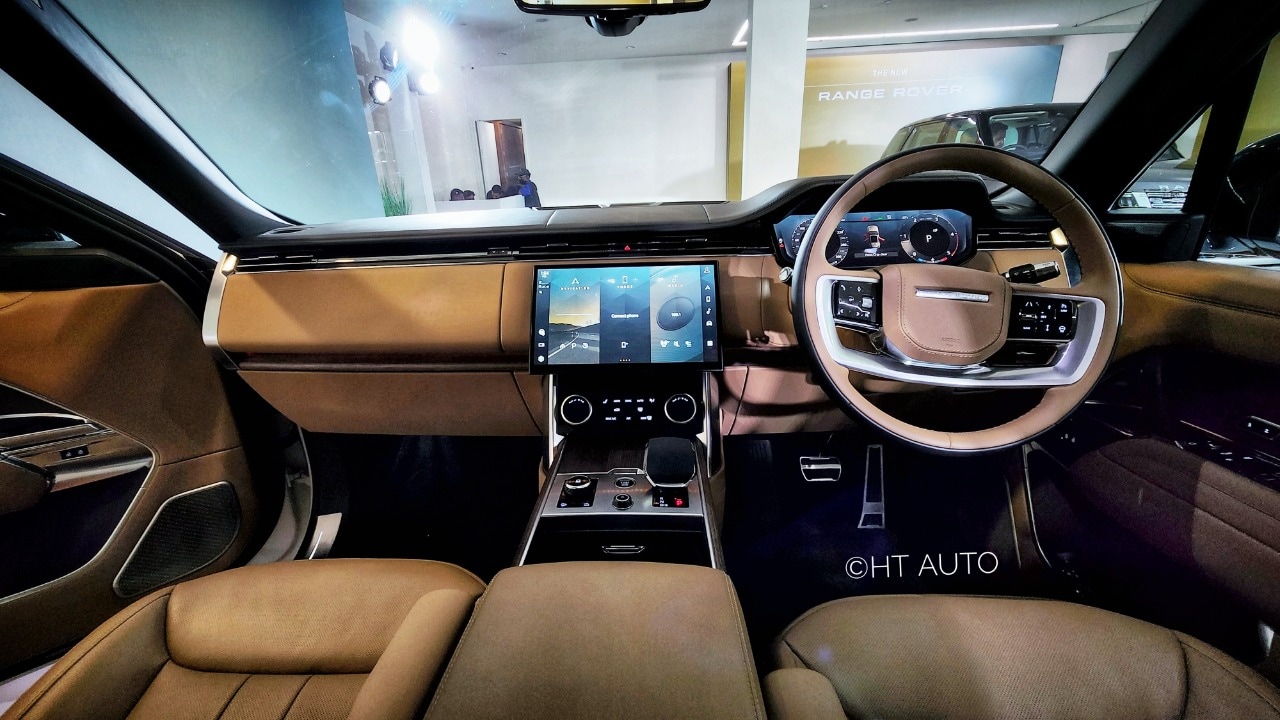 The SUV also comes with a cabin air-purification system that brings down pollutant levels.

There is also a cabin air-purification system that brings down pollutant levels in a matter of seconds. But my personal favourite is the sound system that has a total output of 1600 watts. The 35 speakers inside obviously bring alive anything you would choose to play through these but interestingly, not all of these are active. There are eight speakers of these - two on each of the four headrests - that act as noise cancellation systems to further minimize surrounding sounds from outside the vehicle. This is something to do with white noise but we obviously couldn't test this owing to the largely silent setting inside the showroom where this vehicle was parked.

Overall, the Range Rover has a cabin that defines how well opulence and comfort can be incorporated in a simplistically luxurious form factor. But do note here that some of the highlights mentioned above are optional extras.

The latest Ranger Rover is being offered with both the Standard Wheelbase as well as LWB versions and this goes to show just how much priority has been attached to cabin comfort.

The Range Rover is offered in four variants - SE, HSE and Autobiography, with a First Edition available only in the first year of production and comes with a number of updates over the Autobiography model. There are five body colour options but the Sunset Gold Satin is exclusive to the First Edition.

The Range Rover is obviously claiming to be as capable on off-road tracks as ever and boasts of a water-wading depth of up to 900mm. But its performance on roads and off is for another day.

The Tata-owned British brand has gone all out to ensure that its flagship SUV isn't just at the pinnacle of its own product pyramid but has what it takes to beat back its German rivals.

The likes of Mercedes, Audi and BMW have stellar models at the top of their respective SUV lineups and tend to be the crowd pullers. And then there are performance models like Lamborghini Urus which too sit at the ₹2 crore plus price bracket. The Range Rover though has always had its priorities right - it takes direct aim at the exclusive elites among an already exclusive base of customers.

It promises an extremely indulgent cabin, a confidently mature road presence and a very capable drive. What's it like in the real world? We'll be right here to tell you soon enough.