Mahindra and Mahindra is expected to drive in the new generation Scorpio SUV later this year. Mahindra will offer the 2022 Scorpio along with the older generation models.
By : HT Auto Desk
| Updated on: 22 Feb 2022, 09:55 AM 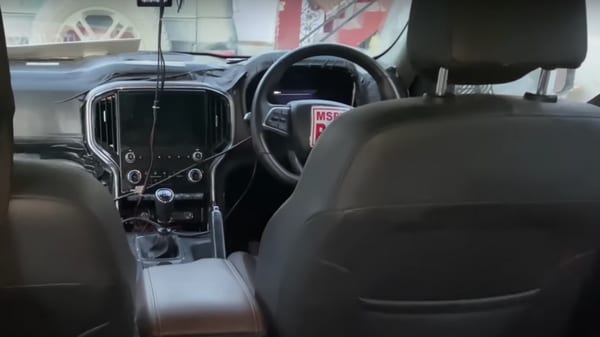 Mahindra Scorpio facelift SUV is likely to be launched later this year. The new Scorpio has been spotted testing on Indian roads a number of times. (Photo courtesy: YouTube/Praveen Rana vlogs)

The test unit of the 2022 Scorpio was spotted by a vlogger who managed to take a look inside and show what the new Scorpio will offer. The three-row SUV will have only front-facing seats. The seats, as seen on the test mule, are wrapped in leather. The second-row passengers will have dedicated AC vents placed at the back of the armrest for front passengers.

The dashboard of the 2022 Scorpio SUV will have a large infotainment unit, most likely to be a touchscreen unit. The infotainment unit is flanked by vertically-oriented AC vents. There will be physical buttons on the centre console for things like climate control and others. The driver display is also a digital unit while the steering wheel will have controls mounted on it.

Earlier spy shots of the 2022 Scorpio facelift SUV hints that it will be offered with features like sunroof and electrically adjustable front seats among others.

The exterior of the new generation Scorpio SUV will carry several changes. These will include a redesigned grille with the new Mahindra logo which was introduced when the carmaker launched the flagship XUV700 SUV last year. Among other changes are LED headlamps, LED DRLs and LED taillights.

2022 Mahindra Scorpio will be based on the carmaker's new ladder-on-frame platform, which it will share with its sibling Thar SUV. The new generation Scorpio is also expected to come with four-wheel drive option besides other trims when launched.

Mahindra is likely to offer the 2022 Scorpio SUV with both petrol and diesel options. The 2.0-litre turbocharged petrol engine, which also powers the Thar SUV, is likely to be used for Scorpio too. The engine is capable of a maximum output of 130 bhp of power and 320 Nm of peak torque.It is expected to come mated to both six-speed manual and automatic transmissions.

For diesel units, Mahindra is likely to use 2.2-litre mHawk diesel engine in the new Scorpio. Mated to manual and automatic transmission, the engine can generate maximum output of 138 bhp and 320 Nm of peak torque.