Honda Civic hatchback has been one of the best-sellers for the Japanese carmaker since its launch in 1972.Honda has been able to sell around 27 million units of Civic so far across the world.
By : HT Auto Desk
| Updated on: 10 Jun 2021, 09:28 AM 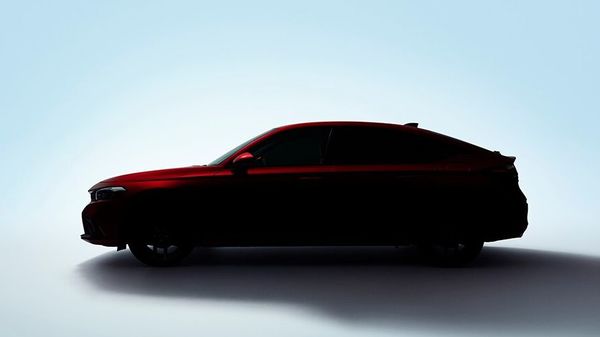 Honda has released teaser images for the 2022 Civic ahead of its unveiling on June 24.

Honda has released teaser images of the all-new Civic Hatchback ahead of its official debut scheduled for June 24. Honda says that the new Civic hatchback is has been developed based on the Civic Sedan. The 11th generation Civic hatchback promises to provide the same versatility as a 5-door car, as well as a 6-speed manual gearbox.

Like the New Honda Civic sedan, the New Civic Hatchback will have a more mature design than its predecessor. The front of the new Civic Hatchback should be identical to the sedan version. Significant changes are also expected at the rear, including a revised roofline and revamped rear fascia. It's not clear exactly what changes have been made to the rear, but it can be seen from the teaser that the taillights are different from the sedan version.

Both engines are likely to be mated to a CVT transmission. It is also likely that Honda will offer the new Civic hatchback with a six-speed manual transmission too.

Civic has been one of the oldest and popular brand models from the Japanese carmaker. As one of Honda's key global models, it has been one of the best-sellers for the carmaker over the years. According to Honda, it has been able to sell approximately 27 million units of the Honda Civic Series across the world since it made its international debut back in 1972.