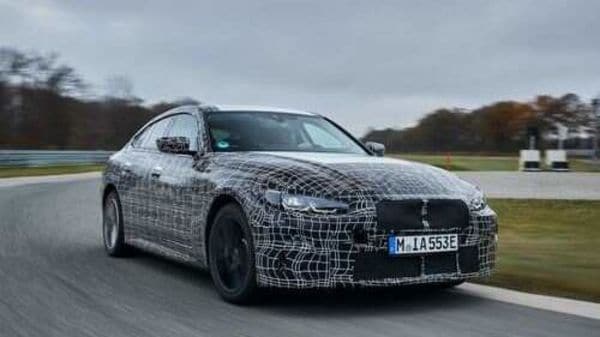 BMW had showcased the concept model of the upcoming i4 electric sport sedan last year.

Days after unveiling the new iDrive 8 operating system for its future cars, BMW is going to reveal the much-anticipated i4 electric sedan on March 17. The German auto giant confirmed this during an interaction with the media that the car will make its debut in two days time.

2022 BMW i4 will be the first electric sports car from the brand which already has several electric cars in its fleet. It will be one of the first BMW models to wear the latest iDrive 8 technology, as was announced by the carmaker earlier. When launched, the BMW i4 is going to rival cars like Tesla Model 3 Performance and Audi e-Tron GT.

BMW had showcased the concept version of the i4 electric sports car in March last year. BMW claims its 390 kW electric motor is capable of generating a range of 600 km on single charge and can hit zero to 100 kmph in just 4 seconds. The pure-electric Gran Coupe is also expected to have a top speed in excess of 200 kmph.

According to reports, BMW is going to retain much of the design characteristics showcased on the concept version and carry them on to the production version of the model. The concept version had a modern and confident appearance with a long wheelbase, fastback roofline and short overhangs.

It is not clear whether BMW will retain the Frozen Light Copper colour scheme that was on the concept version. If true, it will surely have a visually stunning effect. There were blue elements at the front too, as well as the sides and rear of the car.

The concept i4 model had a reworked grille, which appears more like a bucktooth. BMW fans are quite divided over the new grille that stretches all the way down to the edge of the bumper now. BMW claims that the prominent, closed-off kidney grille provides a tangible connection between the past and future of the carmaker's models.

The BMW i4 electric sport sedan is likely to come with three different driving modes - Core, Sport and Efficient. The electric motor developed for the BMW i4 can churn out maximum output of up to 530 hp, which ranks it alongside a current BMW V8 combustion engine.