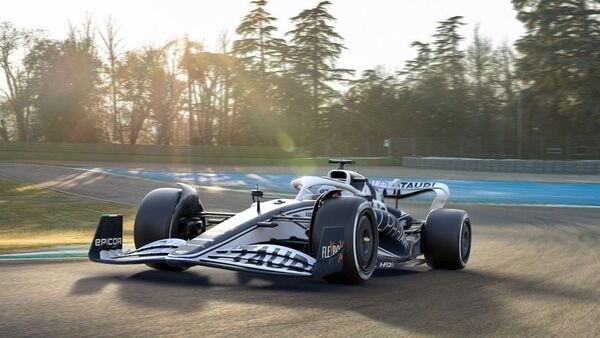 AlphaTauri AT03 is one of the curviest F1 cars unveiled this season.

AlphaTauri which was rebranded from Toro Rosso back in 2020, is now ready to start its third Formula One season and ahead of that, the team has unveiled its new machine through digital rendering. Christened as AlphaTauri AT03, the new 2022 Formula One race car will be driven by Pierre Gasly and Yuki Tsunoda.

The AlphaTauri AT03 gets some unique design elements compared to the other 2022 cars we’ve seen so far. It gets an undulating engine cover, square side pod intakes and one of the curviest rear wings. It also gets a simplified front wing.

This is the fifth F1 team that unveiled the race car for the upcoming season after Aston Martin, Haas, McLaren and Red Bull. There are five other teams that will unveil their F1 race cars this month. Williams FW44 is set to be revealed on 15th February, while Ferrari F1-75 is slated to be unveiled on 17th February, followed by Mercedes W13 on 18th February, Alpine A522 on 22nd February and Alfa Romeo C42 on 27th February.

The new race car has been designed in line with the revised Formula One regulations that have been enforced for the upcoming season.

The 2022 Formula One race cars come featuring a ground effect floor, simplified front wind, dramatic rear wing, a host of design changes to ensure better aerodynamic efficiency. Also, they will run on larger 18-inch wheels ditching the 13-inch wheels. These design changes have been enforced by the FIA to ensure more safety and more aerodynamics.

The 2022 Formula One race cars will however continue using the same powertrain as the previous season. Another key change this season will be the use of a higher blending of ethanol in fuel for these race cars. As Formula One aims to reduce its carbon footprint generated during the racing, biofuel is expected to help the teams to achieve that.