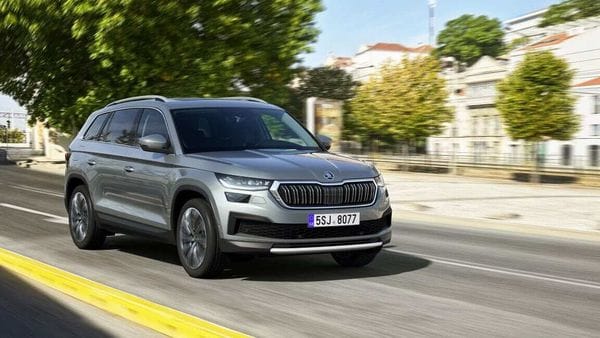 Skoda has unveiled the facelift version of the Kodiaq SUV.

About four years after Skoda launched the first model of the SUV model, the manufacturer has updated the Kodiaq, which is also available with 7 seats, and has improved aerodynamics.

For the first time, the range of options for this large Skoda SUV includes the innovative Matrix LED headlights. The Kodiaq RS version, the top-of-the-range variant, has not only received design changes, but also fitted with a new and more powerful TSI engine.

The new Kodiaq will be available in Active, Ambition and Style trim levels, as well as in L&K, Sprotline and RS.

Skoda has made specific modifications to the appearance of the Kodiaq SUV, which give it an even more robust appearance, while optimising its aerodynamics. The striking high hood and the newly designed, more vertical Skoda grille reinforce the car's visual presence.

The Active, Ambition and Style trim levels will feature aluminium-effect trims on the front and rear apron, reinforcing the SUV's off-road appearance. The LED headlights, with optional Full LED Matrix technology, are significantly slimmer and, together with the relocated fog lamps, create a distinctive visual element even in the dark. Skoda has also added new alloy wheels up to 20 inches to the Kodiaq range of options. The interior is highlighted by a 10.25-inch digital instrument cluster and a large 9.2-inch infotainment system.

Inside, in addition to the new trim slats, additional contrast stitching is now included on the dashboard and door panels of the Kodiaq, which can accommodate up to seven people with an optional third-row folding seat.

The new Kodiaq also gets ventilated seats, including a massage function as option for the driver and front passenger and is a first for the model range. The LED ambient lighting also has more features.

The Skoda Kodiaq offers modern infotainment systems with DAB technology, the Laura digital voice assistant and a wide range of online solutions, including radio channels. The three infotainment systems - Bolero, Amundsen and Columbus - come from the third generation of the Volkswagen Group's modular infotainment platform, and are always connected thanks to the integrated eSIM. The Skoda SUV now comes equipped with a 10.25-inch virtual cockpit and a 9.2-inch infotainment system.

Two diesel and three gasoline engines provide outputs of between 150 hp and 245 hp. The 2.0 TSI petrol engine fitted in the RS variants makes its debut in the Kodiaq. The entry-level 1.5-litre TSI is the only variant available with a 6-speed manual gearbox and front-wheel drive. All other variants are fitted with a 7-speed DSG transmission as standard; all-wheel drive also comes standard with the new Kodiaq that deliver 190 hp or more.