The all-new Kona N will be the latest addition to the Hyundai N family, the Korean carmaker's high-performance, motorsport-inspired line-up.
By : HT Auto Desk
| Updated on: 10 Mar 2021, 10:41 AM

Hyundai has released images of its upcoming performance SUV Kona N ahead of its global debut.

Hyundai has all but revealed details about its new performance SUV the Kona N before its launch. The high-performance version of this B-segment SUV was initially shown in a teaser last January, but now, Hyundai has shared images of it without any camouflage. It is also the first SUV model to get an N performance tuning.

When given a facelift in September last year, the Kona was first introduced with a sportier N Line finish option. With a very different face when compared to the regular Kona, this N Line model looks more aggressive and of course, this new full N model will raise its level even higher.

The slightly darker picture posted shows a large grille with the N logo as well as a different grill interior design. Three strips of air openings are on top of the grille, and they are then flanked by LED headlights that sit once with air openings in the corners of the bumper. At the top there is an LED DRL.

According to Hyundai, they got the inspiration for the bottom of this Kona N grille from the fuselage and it connects all the way to the side of the car, showing aerodynamic efficiency as well as speed. When comparing the N model with the N Line model, everything looks the same except for the inside of the top and bottom grille, as well as the red stripe on the bottom lip.

The difference at the rear is more pronounced, where this N model gets a two -wing roof spoiler to improve its downforce. This large wing also has a round -shaped brake light as well as an N stamp as on the Veloster N and i30 N. The diffuser is the same as the N Line model, but this N model is further augmented with two large exhaust nozzles as well as a red stripe.

Just like the N Line model, the plastic finish around the fender of this full N model is changed from black to the same colour according to the body, and according to Hyundai, it gives a visual impression like it is closer to the floor. Completing its look are exclusive rims from N. 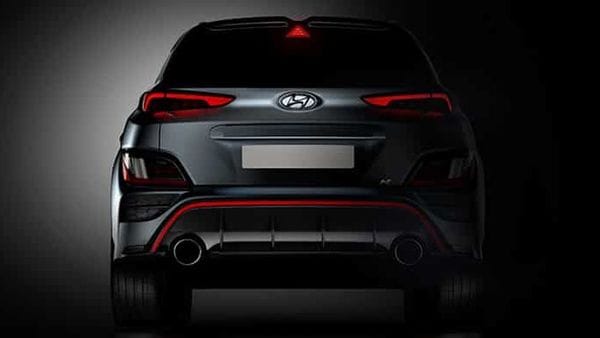 The rear of the new Hyundai Kona N gets a two -wing roof spoiler besides other design upgrades.

The automatic transmission is a new addition given as an option to last year’s N model, and it features N Grin Shift, N Power Shift and N Track Sense modes. Hyundai has also confirmed the Kona N will have Launch Control as well as an "emotive soundtrack".

The all-new Kona N will be the latest addition to the Hyundai N family, Hyundai’s high-performance, motorsport-inspired line-up. It will also expand the successful Hyundai SUV family.