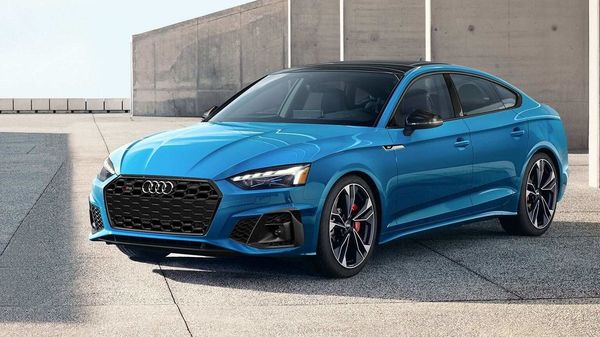 Audi S5 Sportback will be launched as a CBU unit in India.

Audi India is all set to launch the 2021 Audi S5 Sportback luxury sedan this month. The German carmaker has confirmed that the S5 Sportback will be launched on March 22. The confirmation comes just days after Audi teased the S5 Sportback.

The car, painted in 'Turbo Blue' colour scheme, was teased earlier this month. Besides this colour, Audi is expected to introduce the S5 Sportback in several more colour options.

Going by what Audi has already revealed, the design of the 2021 S5 Sportback will be quite sporty and bolder against its predecessor. The tweaked sharp-looking LED headlamps and the DRLs form a stylish appearance at the front.

2021 Audi S5 Sportback is likely to be powered by a 3-litre V6 TFSI engine which is already available in the US market. The engine is capable of churning out 354 horsepower and 500 Nm of torque. The S5 Sportback is claimed to hit from zero to 100 kmph in less than five seconds. The light clusters flank the big signature grille at the front which appears to wear a blacked-out honeycomb pattern. The sleek-looking LED taillights add a bit more muscle to the S5 Sportback from the rear.

Inside the cabin one can expect an all-black theme with a host of modern features.

Much like most of the Audi cars, The 2021 S5 Sportback is also going to be brought to India through the CBU route. The 2021 Audi S5 Sportback luxury sedan is likely to be priced somewhere between the range of ₹65 and 71 lakh (ex-showroom). When launched, it will take on rivals like Mercedes-AMG C 43, Mercedes-Benz GLC 43 AMG and BMW M340i.