Kolkata Police already has more than 200 Tata Nexon EVs in its fleet, which were added in September last year. The state recently announced exemption of registration and other taxes on electric vehicles.
By : HT Auto Desk
| Updated on: 06 Jun 2022, 10:44 AM 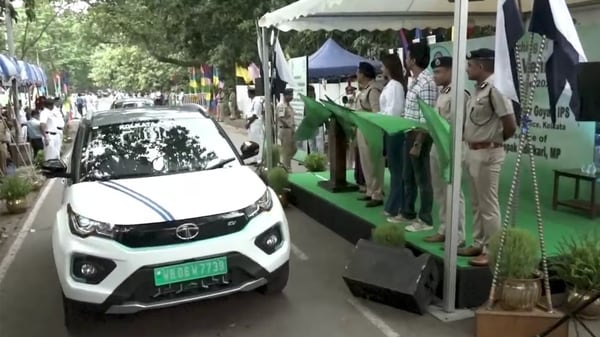 The event, organised at the Police Athletic Club in the city, saw flagging off the electric cars with blue stripes on the bonnet and Kolkata Police badging on the sides. The city police department shared a video of the flag-off ceremony on its social media platforms. Kolkata Police also said that it will soon add a fleet of electric cycles for patrolling purposes in coming days.

The Nexon EVs are part of the state government's plans to shift to electric vehicles for official purposes. The decision was announced last year when the city police department inducted its first batch of electric cars. In September, Kolkata Police added 226 Tata Nexon EVs to its fleet in an attempt to phase out its diesel vehicles used for transport and patrolling jobs. These electric SUVs have been taken on lease for a period of 8 years.

Last month, the West Bengal state government had announced that electric two-wheeler or four-wheeler buyers will be exempted from paying registration fees, motor vehicle and other taxes in the state. It also extended similar benefits to those who plan to buy a CNG vehicle. The decision has been effective from April 1 this year and the offer will remain valid till March 31, 2024.

West Bengal's push for electric vehicles comes amid reports that the state government is planning to revamp the iconic Hindustan Motor facility near Kolkata, which was once home to India's popular car Ambassador. Hindustan Motors has signed an MoU with Peugeot to develop electric cars. The first of the EVs may hit Indian roads in around two years from now.