The internationally offered Suzuki Swift Sport gets a 1.4-litre, turbo-petrol engine with 127 bhp. Apart from that, it also gets a tweaked chassis and stiffer suspension setup.
By : HT Auto Desk
| Written By : Prashant Singh
| Updated on: 26 Apr 2022, 05:54 PM 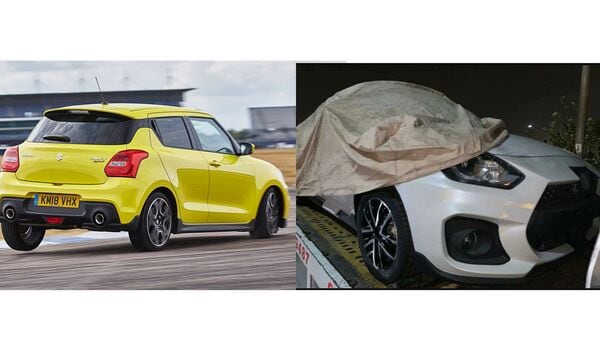 Swift Sport is a fantastic little hatchback on paper, however, its prospects of getting launched in India are next to none.

Maruti Swift is one of the most loved hatchbacks offered in the Indian market. Its quirky exterior looks, balanced performance and value for money proposition are some key elements that make it one of the most popular cars in the country. However, the company has yet not launched the peppier ‘Sport’ trim of the model in India that already retails in the international markets.

Now the Swift Sport has been recently spotted at Mumbai airport, courtesy the Instagram handle of Car Crazy India. What remains unconfirmed at the moment is that this specific unit is a test unit or a private import. Although, the chances of it being the latter are high. Also, this isn't the first time a Swift Sport has been spotted in India, as sometime around in 2020 too, spy images of the same model surfaced on internet stirring up its India launch rumours.

(Also Read: Maruti Suzuki to bolster presence in SUV segment to get back to 50% market share)

The internationally offered Swift Sports sources power from a 1.4-litre, turbo-petrol engine. This powertrain has been responsible for delivering 127bhp and 235 Nm of peak torque. The engine is offered with a 6-speed manual gearbox and the company claims that the car is capable of doing 0-100 run in around 9 seconds, along with a top speed of 210 kmph.

Apart from a more power engine, the car features some notable chassis modifications as well as a stiffer suspension set up. In addition, it also gets improved brakes.

Needless to point out, this specific trim of the Swift is a fantastic little hatchback on paper, however, its prospects of getting launched in India are next to none.