Triumph rides in Rocket 3 GT at ₹18.40 lakh, its most expensive bike in India

The Triumph Rocket 3 GT is a touring focused version of the standard Rocket 3 motorcycle.It is the most expensive Triumph bike in India.Its rivals include the Harley-Davidson Fat Boy and the Ducati Diavel 1260.
By : HT Auto Desk
| Updated on: 10 Sep 2020, 12:20 PM 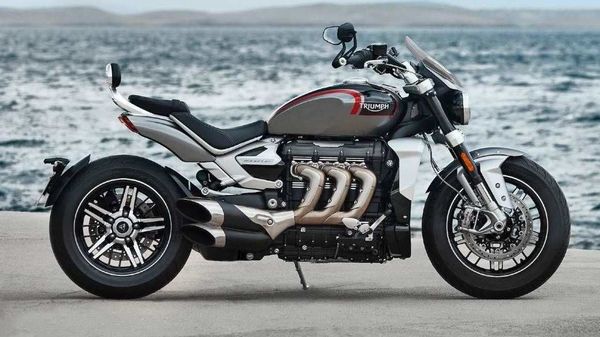 Triumph Motorcycles on Thursday launched the new Rocket 3 GT power cruiser in the Indian market starting at ₹18.40 lakh. It costs ₹40,000 higher than the regular Rocket 3 motorcycle which has been priced at ₹18.00 Lakh.

The new Rocket 3 GT is a touring focused version of the standard Rocket 3 motorcycle which is already on sale in the Indian market. In terms of design, it is almost identical to the Rocket 3. It will be available two colour options - Silver Ice/Storm Grey and Phantom Black.

As against the standard model, it gets a number of additional features which make it more comfortable and touring friendly motorcycle. It comes with a more forward-set foot pegs as found on typical cruisers. It also uses touring-style handlebar for extended support to the rider. Moreover, it benefits from a taller windscreen, adjustable pillion footrests, heated grips and a pillion backrest as standard.

It has been given over 50 new accessories which include a range of luggage and several bits which enhance practicality and comfort. The new Inspiration Kit is called the 'Highway'.

The new Rocket 3 GT gets a 2,500 cc, inline three-cylinder, liquid-cooled powertrain which comes mated to a 6-speed transmission. The engine has been rated to deliver 167 PS of power and 221 Nm of torque.

Speaking on the launch, Shoeb Farooq, Business Head for Triumph Motorcycles India said, "The Rocket 3 GT is an enthusiast’s machine, being an ideal amalgamation of class defining technology, dominating road presence, astounding performance and ergonomics. It is a legend in itself. The Rocket 3 GT completes the Rocket range which has the roadster and touring variants."

Some of the rivals to the Rocket 3 series include the Harley-Davidson Fat Boy and the Ducati Diavel 1260.