2021 Benelli 302R has received a slew of new changes inside out that make it much sportier and competitive than its predecessor.It now features a lighter frame and a cleaner engine.
By : HT Auto Desk
| Written By : Prashant Singh
| Updated on: 10 Apr 2021, 11:09 AM 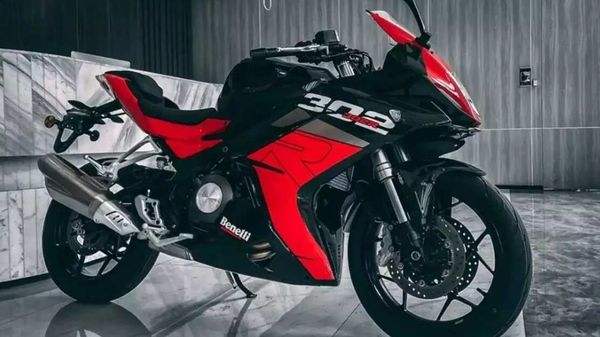 The all-new Benelli 302R has broken cover globally. Benelli's entry-level fully-faired motorcycle has received a slew of new changes inside out that make it much sportier and competitive than its predecessor.

In terms of exterior looks, the bike features way sharper looking body panels. The front headlamps have been tweaked and it now gets a vertically stacked projector lamps. This unit is flanked by LED turn indicators on the either side. The fuel tank looks more muscular and higher raised. It gels in with the revamped rider seat which is flatter in comparison to the previous model. The tail section also appears to be sharper than before. The exhaust unit, on the other hand, appears to be the same.

Benelli claims that it has also tweaked the frame of the bike which is now lighter than before. In terms of overall weight, the bike has lost a whopping 22kg, and it now tips the scales at around 182 kg.

The motorcycle continues to source power from the same 302 cc parallel-twin engine which is now BS 6-compliant. This engine has been rated to develop 34 bhp of maximum power. While the power may have dipped minutely, the overall considerably lesser weight only means that the power-to-weight ratio should be more aggressive now.

The motorcycle gets 41mm front forks with preload adjustability. These are complemented by a mono-shock that is also preload adjustable. For the braking duties, it uses dual-discs four-piston caliper at the front wheel and a single disc at the rear.

Expect the new Benelli 302R to set foot on the Indian soil in the next few months. As far as pricing goes, it is expected to be aggressive, as seen in the case of TRK 502. It will be a direct rival to the likes of Kawasaki Ninja 300.