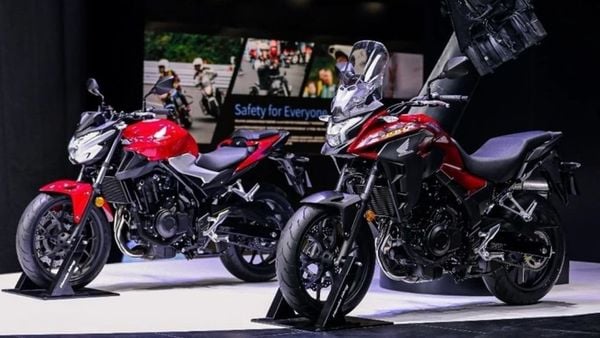 Both the new bikes in Honda's CB400 range feature the same engine platform.

Honda has revealed the new CB400F, CB400X motorcycles at the ongoing Shanghai Auto Show in China. Both the new motorcycles will go up on sale in the Chinese markets in the next few weeks. These bikes will be sold in China as CKD imports via Wuyang Honda.

The CB400F features the same basic design inspired by the bigger CB500F motorcycle, albeit with some minor tweaks here and there. At the front sits a restyled LED headlamp that lends it a very aggressive appeal. Moreover, other design updates include the use of a more muscular fuel tank with integrated aero ducts and split seats.

Overall, the bike has been designed for everyday use and offers a neutral riding position thanks to the flat handlebar and mid-set footpegs. It sits lower in the range under the CB500F. At the heart of the motorcycle sits a 399 cc liquid-cooled parallel-twin engine that generates 44.87 PS of maximum power and 37 Nm of peak torque. Its transmission is a six-speed unit.

The CB400X is the adventure touring counterpart of the CB400F. It is a smaller capacity sibling of the CB500X which was also launched in the Indian market recently.

It features the same engine and platform as its naked counterpart (CB400F) but gets a completely different design and suspension setup that targets a unique (adventure-oriented) set of customers. Its longer suspension travel, higher set handlebar positioning, high ground clearance and relatively taller seat height gives it a proper ADV stance.

There is no word if the bikes will be made available in the Indian market anytime soon.