The front camera on the Benelli TRK702 sits just beneath the headlamp, while the rear unit comes placed on top of the license plate lamp.

While it is known that Benelli has been working on a new version of the TRK702 adventure motorcycle, new type approval documents have managed to throw light on the newer details of the bike. Yamaha’s Tenere 700 rival is reaching its final development stages and is likely to see the light of day sometime later in 2022, first in the Chinese market, followed by everywhere else.

The bike design registrations provide a better look at the motorcycle's styling and some fresh technical additions. The TRK702 uses a chassis that's quite similar to its smaller TRK502 version that's also sold in the Indian market. Underneath this chassis sits a 693cc engine that shares the specifications (including bore and stroke) with the CFMoto's existing 693cc unit. However, this unit is more compact as well as lightweight in comparison to the design of the recently introduced TRK800's 75hp unit. 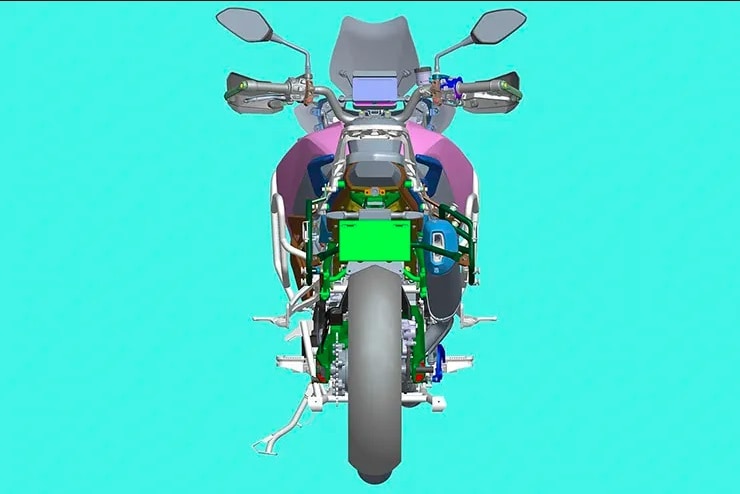 The Benelli TRK702 uses a chassis that's quite similar to its smaller TRK502 that's also sold in the Indian market.

One of the key takeaways from the new design documents is the use of front and rear cameras on the motorcycle. It is not new for Benelli as the company has already experimented with this tech as it was previously introduced on the 1200GT three-cylinder tourer which broke cover back in 2020. This tech is being fastly adopted in the Chinese market as Zongshen has also made use of such cameras for its Norton 650-powered RX6 adventure bike. Looking closely at the design image reveals that the front camera sits just beneath the headlamp, while the rear unit comes placed on top of the license plate lamp.

These cameras essentially work as dash-cams, feeding live images to the TFT dash or recording them. This basically comes in handy in order to provide evidence in case of an accident or any other emergency.

Moreover, the exterior styling on the model takes inspiration from the bigger TRK800 motorcycle and is definitely a big step up from the TRK502 model. Also, the chances of it being announced for the Indian market aren't nil afterall. So expect could also make way for the Indian market post its international debut.