With parts hotter than Delhi, Canada targets end to sale of ICE vehicles by 2035

With a combination of investments and regulations, Canada aims phase out fossil-fuel-powered vehicles by 2035.The country is going through an intense climate change as it recorded its highest ever temperature of 46.6°C for the first time on June 27.
By : HT Auto Desk
| Written By : Deepika Agrawal
| Updated on: 30 Jun 2021, 12:47 PM 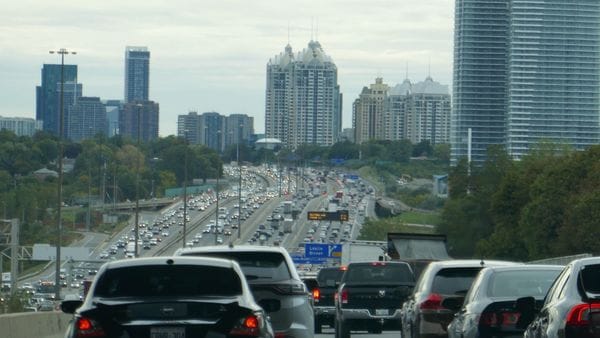 Traffic on the roads of Toronto, Canada. (File photo used for representational purpose)

Canada has become the latest country to announce a ban on sales of new internal combustion engine cars and light trucks from 2035 as it looks to accelerate the adoption of electric vehicles and achieve net-zero emissions across the country by 2050.

In November last year , the Canadian province of Quebec had announced that it will ban the sale of new gasoline-powered passenger cars from 2035 , joining the likes of California. However, now the Canadian federal government has announced that the initiative will be adopted across the whole country.

With a combination of investments and regulations, the country aims to transition toward the green goal. The government has also set interim targets for 2025 and 2030."We are committed to aligning Canada's zero-emission vehicles sales targets with those of the most ambitious North American jurisdictions ," Environment Minister Jonathan Wilkinson said in the statement.

The move comes as Canada is going through an intense climate change. The country recorded its highest ever temperature of 46.6°C on Sunday as some parts of the country suffered from heatwave. On Tuesday , it recorded its highest ever temperature for a third straight day at 49.5°C. Thus , reducing greenhouses gases in the country has become all the more important. Condemning the climate change , Swedish environmental activist Greta Thunberg wrote on Twitter , "We're destabilizing the planet. Meanwhile our leaders continue to... invest fantasy amounts into fossil fuel infrastructure."

In the last few years, various other countries have set targets to ban the sale of fossil-fuel-powered vehicles with Norway leading the pack. The country has set a target of phasing out new fossil fuel-powered vehicles by 2025. It is already on its way to achieve the goal as majority of new vehicle sales there are already all-electric vehicles.

UK will implement a ban on new vehicles with internal combustion engines by 2030 and France will phase out fossil-fuel-powered vehicles by 2040. Germany is looking to do the same by 2030 while Ireland is aiming to be carbon neutral by 2050.