Liwa Hill Climb is a race where the participants are expected to scale the Moreeb Dune that has a height of 300 metres.The annual event takes place in UAE.
By : HT Auto Desk
| Updated on: 09 Jan 2022, 14:28 PM 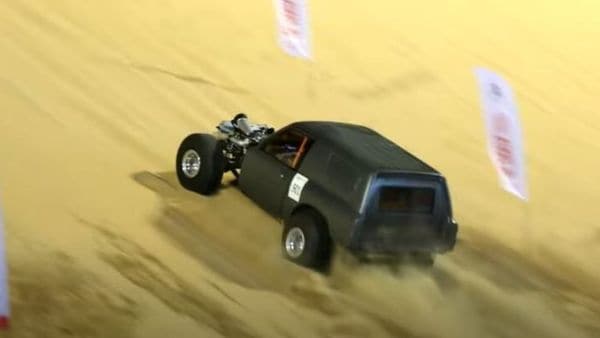 Screengrab from the video posted on YouTube by PeterBjorck.

Inventive speed sports is common around the world with challenging races to give the participants a massive adrenaline rush. A drag race of such sort called the Liwa Hill Climb is an annual event hosted at the Moreeb Dune, UAE that sees the participation of SUVs that try to climb the sand dune that has the height of a mid-century skyscraper as fast as possible.

The sand dune has a height of 300 metres and a width of 1600 metres. The drivers of the competition are directed to start at the flat ground. As they have to climb a stiff pile of sand ahead, the participants launch their respective cars so hard, that one can notice sand being thrown in all the directions revealing aggressive engine transmission.

These engines are heavily boosted six and eight-cylinder motors that make the SUVs way too powerful to tackle the sand. Since the surface of the track is not stable, despite powerful engines, the drivers find it difficult to navigate their cars properly. The participants try their best to stay till the end of the course and make a run over the sand for at least six seconds, each trying to reach the top of the dune as they struggle to gather traction in the wheels all the way up to the top.

It is not only the event that attracts people but the video of it too heavily draws many towards it. Many posted positive comments on the event video posted on YouTube. A few stated that they eagerly wait for the coverage of the Liwa Hill Climb event every year. Some highly requested the behind-the-scenes footage of the race. The comments make it evident that speed junkies around the world love the combination of a good powerful turbo and sand.