The Lego model is a miniature of GTA Spano, a Spanish supercar.The Lego model derived its power from electric motors.
By : HT Auto Desk
| Updated on: 27 Oct 2021, 09:00 AM 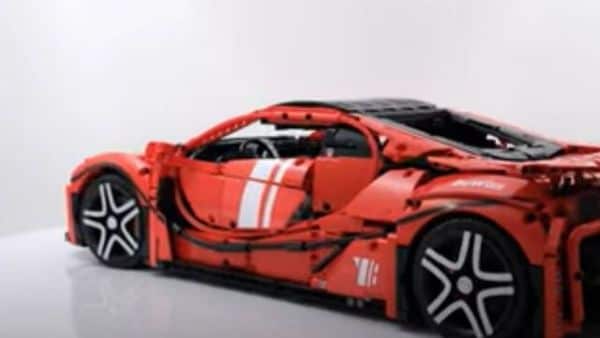 Screengrab from the video posted on YouTube by BuWizz.

Lego cars may be common but there is always something special about a rare unit around the next bend. Spania GTA and BuWizz teamed up together to develop a 1:8 scale GTA Spano Lego packed with electric motors which has caught the world's fancy. Based on the collaborators' verdict, the Lego model set a record of becoming the fastest Lego car in the world.

The model touched the maximum speed of 36.5 kmph that may be far less compared to the real-world Spano but commendable none the less. The latter can sprint over 321 kmph as under the hood, it features a twin-turbocharged 8.0-litre V10 engine. It can churn a power output of 925 horsepower and a peak torque of 1,200 Nm.

(Also read | Unleash the superhero in you with this 1,306-piece LEGO Batmobile)

However, the mini version of the car boasts 10 BuWizz electric motors. It also features additional five electric motors to control the other vehicular functions. These functions can be controlled either through a customisable iOS or Android app and Bluetooth connectivity. The screen in the model is capable of displaying information such as acceleration, power and also G-forces. The miniature model of the Spanish supercar comprises 3,880 Lego pieces including a detailed interior.

The video garnered a lot of attention and comments that praised the Lego model of the supercar. Many congratulated on the feat achieved by the team and also appreciated the design that looked close to the real thing.

Earlier it has been reported that a Lego F1 model was built by professionals that contained five lakh bricks. This model beat the record held by a Ferrari model that was built using 3.50 lakh bricks.