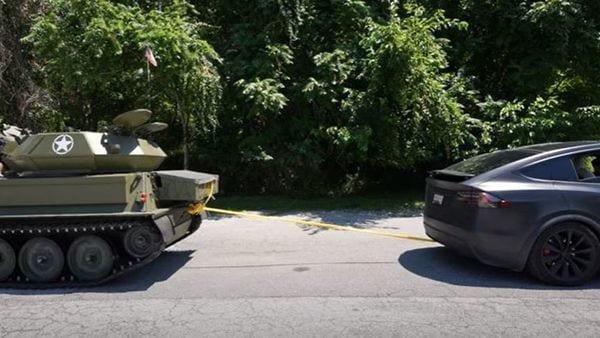 (Image: Screengrab of a video posted by Dobre Cars on YouTube)

It is common to read about roadshows and vehicles participating in them to showcase their stunts and prowess but a new video on the internet is more of tomfoolery than a stunt. Hosts of the YouTube channel pitted a Tesla Model X against a tank vehicle, precisely a combat vehicle, in a tug-of-war. Can you already guess who will be the winner?

While a Model X is roughly 5,500 pounds or 2,495 kilograms, the massive green tank is somewhere around the 20,000-pound mark. Yet, the Tesla sedan is confident enough that it stands a chance in the battle.

The video starts with the combat vehicle cruising through the US roads, thus we can assume that it is a road legal vehicle. It is then brought to a spot where a Tesla Model X is already kept parked. The host of the YouTube channel introduce both the vehicles to the viewers and the massive interior of the green combat vehicle. Then they begin with a drag race of the two vehicles in which Tesla seems to be the clear winner.

This is followed by the real battle of the tug-of-war. One of the hosts ties a long yellow rope at the back of the tank and the Model X, just like the way a rope is held between to persons during an actual tug-of-war. Then, he declares the start of the competition. Just when both the vehicles, facing opposite directions, start pulling the rope in their direction, it breaks.