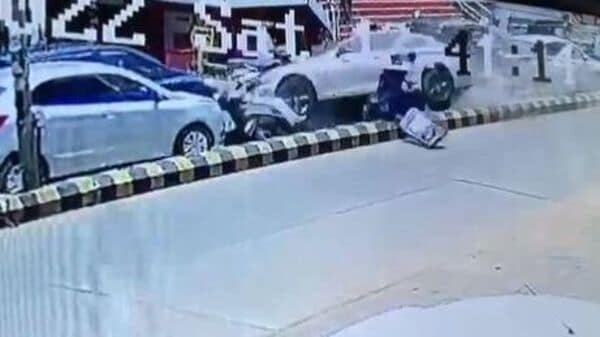 Screenshot of the video of the incident posted on Twitter

A CCTV footage caught a speeding BMW car jumping over a divider and hitting a woman riding a scooty in Mangaluru, Karnataka during the afternoon hours on Saturday. The incident took place at Ballalbagh junction at around 1:20pm. The woman on scooty is in a critical condition as the vehicle threw her under another car after ramming into her scooty, Hindustan Times reported.

Another woman standing on the divider to cross the road saw a narrow escape as the out of control car zoomed past her. She lost balance and fell over the divider and can be seen getting up in the video after the car whizzes past her. A man on the other side of the road can be seen walking towards her for help after the horrific incident.

The BMW rear-ended another car before coming to a halt near the divider. The driver of the other car too sustained injuries and is reportedly under treatment.

The 30-year-old driver of the vehicle, who runs an interior decoration business, has been taken into police custody. The car driver was reportedly under the influence of alcohol when the incident took place. Further investigation into the case is still underway.

The CCTV footage of the unfortunate incident captured the entire commotion. It showed how traffic was moving along quietly until the the BMW car jumped  over the divider and crashed into the scooty, throwing the rider off balance and under another car.