In a YouTube video put up by the vlogger, he can be seen firing a flaming arrow towards the BMW M5 Competition, after which the car explodes into a massive ball of fire.
By : HT Auto Desk
| Updated on: 09 Feb 2022, 11:51 AM 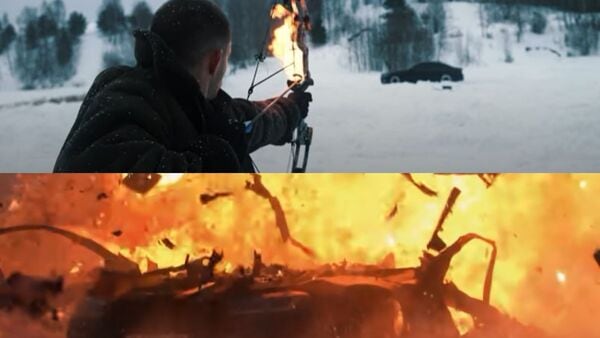 Till what extent can one go to get likes on a YouTube video? Russian Vlogger, popularly known online as LITVIN, has destroyed a BMW M5 Competition that was in pretty good shape. The car was apparently owned by one of LITVIN's friends which he decided to blow up in order to pay “respects" to a friend who got killed while driving a BMW M4 Competition in Moscow last year, local publication ASTV claimed, CarScoops reported.

While that could be one reason to blow up a good looking super sedan, it is safe to assume that raking up millions of views and likes could be another motivation to put up the show of destroying the M5.

In the video, LITVIN can be seen driving the car through the snow and parking it up in an open field. He puts petrol around the car and then fires a flaming arrow towards it. He has a few near-misses but the third arrow hits the BMW at the right place and the car explodes into a massive ball of fire. It can be assumed that the car was already laden with some explosives.

One can see pieces of wreckage from the vehicle flying out and coming within close proximity of the vlogger and his crew who were filming the whole stunt. Quite as expected, the video has already become a hit, garnering nearly 60 lakh views at the time of filing this report.

This is not the first time that the YouTuber has done something as crazy as this for a YouTube video. In October 2020, he set his Mercedes-AMG GT 63 S alight in an apparent protest against a local Mercedes-Benz dealership for allegedly refusing to repair it. He followed it up up with another stunt, driving a brand new Porsche Taycan through the window of a Porsche dealership. Both these videos have garnered many likes.