More than one million LED lights came together to turn the facade of Dubai's Burj Khalifa into one big screen and celebrate the arrival of Porsche’s first fully electric vehicle.
By : HT Auto Desk
| Updated on: 28 Oct 2020, 04:25 PM 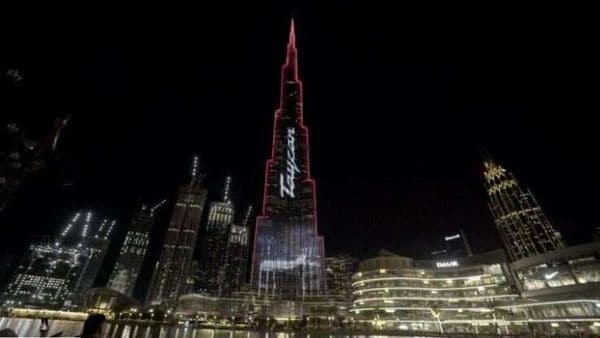 Dubai's Burj Khalifa, the world's tallest building standing at 828 metres high, lit up with a special animation to celebrate the Middle East launch of the all-new Porsche Taycan EV.

Porsche Middle East and Africa FZE has officially kicked off its regional launch for the all-new Taycan. The unique light show on the Burj Khalifa tower portrayed the brand’s most important milestones from the Lohner-Porsche of 1900 to the latest electrified Taycan.

More than one million LED lights came together to turn the facade of the tower into one big screen and celebrate the arrival of Porsche’s first fully electric vehicle. The animation covered a total area of 33,000 square metres.

The over two-minute long light show starts with a visual depiction of the statement behind Porsche's automobile ideology - 'Every Porsche ever built has a soul.' It then goes on to display the most important creations of the brand - Lohner-Porsche, Porsche 356, Porsche 911, 918 Spyder, 919 Hybrid and finally the brand's first all-electric sports car. "The Taycan is a culmination of over 70 years of experience building sports cars, merged with incredible new driving technologies," says Manfred Braeunl, CEO at Porsche Middle East and Africa FZE. "It is a true Porsche offering pure emotion and extraordinary driving pleasure."

Porsche’s regional Dubai office is all set to rollout of the first three Taycan models: the 4S, Turbo and Turbo S. The flagship Turbo S version can generate up to 560 kW power and the Turbo up to 500 kW power. The Taycan Turbo S accelerates from zero to 100 kmph in 2.8 seconds, while the Taycan Turbo completes this sprint in 3.2 seconds. The top speed of both all-wheel-drive models is 260 kmph.

While the Taycan is Porsche's first fully electric model, the brand says it has been at the forefront of electromobility for a long time. The most powerful flagship models in the brand’s range consist of plug-in hybrids such as the Cayenne Turbo S E-Hybrid or the new Panamera Turbo S E-Hybrid. The first ever fully electric model will set another important milestone for company.