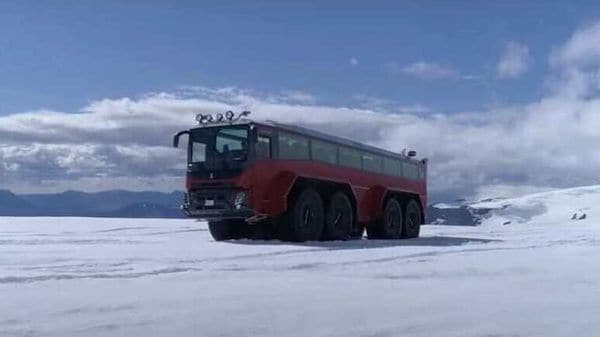 The Sleipnir promises to drive past any obstacle on a tricky Iceland terrain while ensuring comfort for passengers inside. (Image courtesy: Youtube/Atlantik Iceland)

Iceland is a land like no other and attracts tourists from the world over. But some of the terrain here may not be conducive for the ordinary tour buses which are a common sight elsewhere. For those looking at getting a first-hand experience of glaciers, ice sheets, cracks and crevasses, noting short of a Viking war-machine-like bus would do. Say hello then to Sleipnir.

Named as a tribute to the eight-legged stead of Odin, a revered God in Norse mythology, the Sleipnir is a tour bus that is as intimidating to look at as it is capable of going almost anywhere on the Icelandic terrain. At 50-feet long, the bus has a whole lot of space on the inside for tourists to plonk themselves comfortably in. The large windows promise to give passengers a generous view of all that is outside while shielding them from the elements as they sit pretty on leather seats placed on wooden flooring.

The huge tyres provides the support base to the Sleipnir and are claimed to tackle almost anything that comes in its way. But the real power comes from a 850 hp engine at the core of this bus which allows it to hit speeds of up to 60 kmph even on glaciers.

Local reports suggest that this extremely special tour bus cost 70 million Icelandic Krona (around $540,000) to be made. One tour session costs around 10,000 Korna (around $77). And while the bus is more thirsty than a weary traveler in the desert - it drinks 42 litres of fuel per 100 kms, it can safely claim to be the ultimate touring machine for those interested in experiencing Iceland in all its glory before global warming possibly changes the entire landscape.