Watch: Electric vehicle explodes while being charged in China 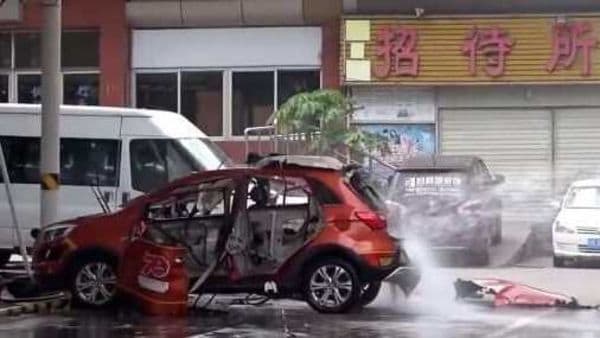 Photo courtesy: Screengrab from a video posted on YouTube by min marine

It must be a regular chore for the owner of an electric vehicle taking it to a charging station and plugging it on to a charger. But what happened next with this plugged in electric car in South China's Sanming is rare.

In a horrific incident, the red electric car, reportedly a plug-in hybrid BAIC EX360 model, exploded and shrank after it was plugged to be charged, local media reported. As per a video footage that has now gone viral on social media, shortly after the EV was plugged on to the charging point, smoke started coming out of it. This prompted the owner of the car to summon the local firefighters who then immediately tried cooling down the smoke by spraying cold water on the rear of the EV.

(Also read: Can sanitisers left inside hot cars explode? Here is what you should know)

However, this was followed by an explosion with the panels of the vehicle getting detached and landing in different directions with quite a lot of force. The video also shows a vehicle panel piercing the roof of the charging area. The car is also said to have shrunk in the process.

Possibly, either the EV's charger or the charging station had some issue that led to this incident. But the actual cause of the explosion is yet to be uncovered and is being investigated by engineers. As per local media, no injuries were reported at the explosion site.