Home Auto News Can Sanitisers Left Inside Hot Cars Explode? Here Is What You Should Know

Can sanitisers left inside hot cars explode? Here is what you should know

Several claims have been made on social media on how sanitisers have caused explosion and fire inside cars left in the open.
By : Sabyasachi Dasgupta
| Updated on: 23 May 2020, 12:12 PM 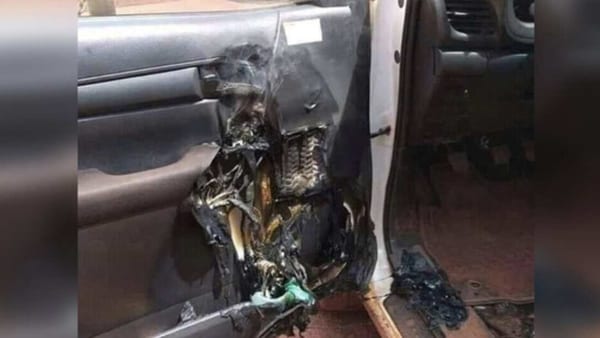 With summer temperature picking up at several parts of the country, questions are being raised whether cars left in the sun can cause the sanitiser to explode. (Photo courtesy: Facebook/Western Lakes Fire District)

At a time when the whole world is battling the coronavirus pandemic, everyone is taking utmost precaution to keep the virus at bay. One of the key weapons to fight the virus is sanitisers. Vehicle owners have now begun to keep a bottle in their cars for use. With summer temperature picking up at several parts of the country, questions are being raised whether cars left in the sun can cause the sanitiser to explode.

Recently, the fire department in Wisconsin, US issued an advisory explaining the potential danger of leaving sanitisers inside a hot car. The authority posted a picture of damaged interior of a vehicle on social media, saying a bottle of sanitiser left in the car caused an explosion and the damage.

The post read, "By it’s nature, most hand sanitiser is alcohol-based and therefore flammable. Keeping it in your car during hot weather exposing it to the sun causing magnification of light through the bottle, and particularly being next to open flame while smoking in vehicles or grilling can lead to disaster. Please respect the possibilities and be fire safe."

Later the post was removed and a clarification was issued. But it left vehicle owners thinking what if it is true.

70 per cent alcohol is quite flammable and must be handled and stored with care. If exposed to direct sunlight or heat it begins to release vapours and start building up pressure inside the container. It can cause explosion and damage. However, it still needs to come in contact with flame or spark for it to ignite.

While it is difficult to ascertain the exact reason why the vehicle shown by the US fire agency got burned by the sanitiser, it is important to learn the lesson that leaving such flammable items inside your car can cause damage either way. Though it is advisable to carry a bottle of sanitiser with you at this time of crisis, staying cautious can save your car from any damage.